Cisco, Polycom, ZTE, Huawei and Avaya are the leaders in the global enterprise video conferencing and telepresence market in Q3 2014, said Infonetics Research.

The enterprise video conferencing and telepresence market revenue grew 11 percent sequentially to $838 million in Q3 2014, but was flat on a year-over-year basis.

Though videophones are the fastest-growing segment of the hardware endpoint market, growth is slowing down, with unit shipments flat on a year-over-year basis in Q3 2014. 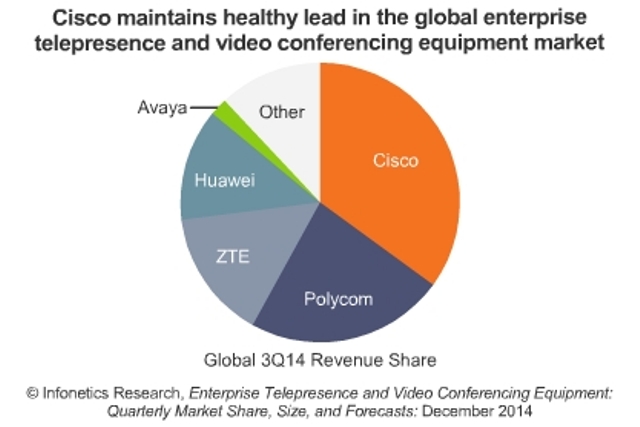 Asia Pacific is the top-performing region for videoconferencing equipment in 2014, due to demand from emerging economies.

For room-based systems, preferences continue to shift away from high-priced telepresence systems to multipurpose room systems.

For personal videoconferencing, hardware sales are peaking, and we’re witnessing a move from hardware to software.

“Overlaying all of this is the decline in infrastructure sales, which are taking a hit due to the rise of cloud multipoint conferencing unit services adoption,” said Matthias Machowinski, directing analyst for enterprise networks and video at Infonetics Research.