Google announced it aims to set up a new undersea fiber-optic cable between the US, the UK, and Spain as part of an effort to improve its services. 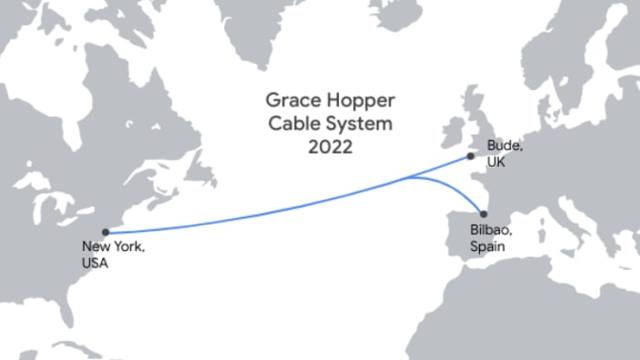 “Once commissioned, the Grace Hopper cable will be one of the first new cables to connect the US and UK since 2003, increasing capacity on this busy global crossroads and powering Google services like Meet, Gmail and Google Cloud,” said Bikash Koley, vice president of Google Global Network, in a blog post.

“It also marks our first investment in a private subsea cable route to the U.K., and our first-ever route to Spain,” Koley said. “The Spanish landing point will more tightly integrate the upcoming Google Cloud region in Madrid into our global infrastructure.”

The Mountain View-headquartered company added that the cable will incorporate novel optical fiber switching that will allow it to move traffic around internet outages more competently than before. It will also have 16 fiber pairs (32 fibers), which is a significant upgrade to the internet infrastructure that connects the U.S. with Europe, Koley said.

Google signed a contract with New Jersey-headquartered underwater cable provider SubCom. The project is expected to be finished in 2022.

In May, Facebook announced it was building an undersea cable around Africa to boost internet access in the continent.

The social media network has partnered with China Mobile, MTN, Orange and Vodafone as well as local network operators on the project, dubbed 2Africa.