BMW Group, Intel and Mobileye announced approximately 40 autonomous BMW vehicles will be on the roads by the second half of 2017.

In a joint press conference at CES, the companies explained that the BMW 7 Series will employ Intel and Mobileye technologies during global trials starting in the U.S. and Europe.

This news follows the partnership announced between the BMW Group, Intel and Mobileye in July of last year.

As part of this partnership, the BMW Group will be responsible for driving control and dynamics, evaluation of overall functional safety including setting up a high performance simulation engine, overall component integration, production of prototypes and eventually scaling the platform via deployment partners.

“This year our fleet of vehicles will already test this joint technology globally under real traffic conditions. This is a significant step towards the introduction of the BMW iNEXT in 2021, which will be the BMW Group’s first fully autonomous vehicle,” stated Klaus Fröhlich, Member of the Board of Management of BMW AG for Development.

Intel brings to the partnership high performance computing elements that span from the vehicle to the data center.

The newly launched Intel GO solution for autonomous driving offers world class processor and FPGA technologies for the most efficient balance of performance and power, while meeting the stringent thermal and safety requirements of the automotive industry.

Intel CEO Brian Krzanich noted that the car to cloud system will perform with consistent, predictable behavior and is validated to the highest level of safety.

“Over the last six months, we have made very good progress in designing a state-of-the-art solution for autonomous driving on both highways and in urban areas. The solution has been defined in a scalable manner to allow affiliate automakers to meet their unique needs,” said Mobileye Co-Founder, Chairman and CTO Professor Amnon Shashua.

Mobileye will further collaborate with the BMW Group to develop the sensor fusion solution, creating a full model of the environment surrounding the vehicle, using input from vision, radar, and lidar sensors.

To further propel the development of the autonomous platform, the partnership plans to release hardware samples and software updates in the upcoming years.

The BMW iNEXT model, which will be introduced in 2021, will be the foundation for BMW Group’s autonomous driving strategy.

Following this vehicle, a range of highly automated models from all BMW Group brands will follow, the companies informed. 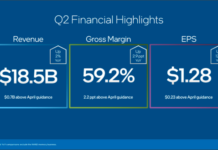 Intel to start production of Sapphire Rapids in Q1 of 2022