IBM has retained its lead in the global Artificial Intelligence (AI) market with 9.2 percent share in 2018, according to a report from IDC. 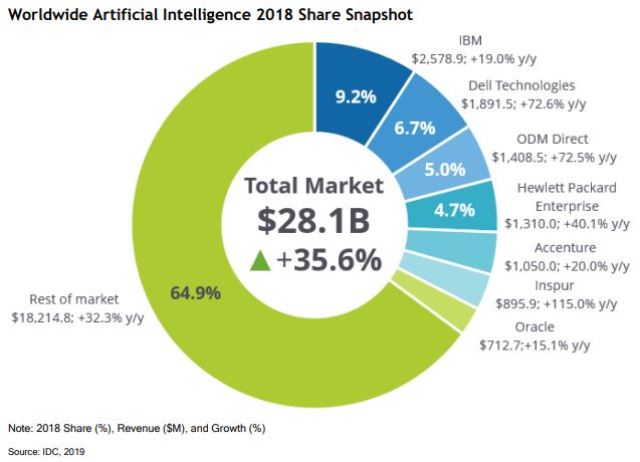 The rest of the market included both incumbents and startups, namely Microsoft, Amazon Web Services (AWS), Google, Palantir, Wipro, EdgeVerve, Nuance, SAP and OpenText. In addition, several smaller vendors such as CognitiveScale, IPsoft, and Expert System have been continuing to grow and making their presence known in the market.

The Artificial Intelligence market revenue rose 35.6 percent to $28.1 billion last year as a result of announcements, initiatives and acquisitions.

IBM said it took the lead in the AI market with 9.2 percent share of the overall market, as revenue rose to $2.58 billion, 19 percent higher than the previous year, driven by growth across software, hardware and services.

“IBM’s recognition in IDC’s report demonstrates the strength of our business and our leading position at the forefront of artificial intelligence,” said Beth Smith, general manager of IBM Watson AI.

IBM has made commitments to information architecture with the launch of IBM Cloud Pak for Data, a multi-cloud data platform that runs on Red Hat OpenShift; announced Watson OpenScale to address bias detection and maintain trust and transparency in AI; and brought a line of Watson solutions and services.

“In 2018, IDC saw that organizations have been slowly moving from proof of concepts to full-blown production with the use of AI applications within the spectrum of business processes across the enterprise,” said Ritu Jyoti, program vice president, Artificial Intelligence, at IDC.

IBM said Watson solutions have been deployed in thousands of engagements with clients across 20 industries and 80 countries. Additionally, IBM Research is a world leader in the science of AI. In 2018, IBM secured over 1600 AI-related patents.