The global venture capital (VC) investment fell 16 percent quarter-on-quarter to $195 billion in Q1 2022, according to GlobalData. 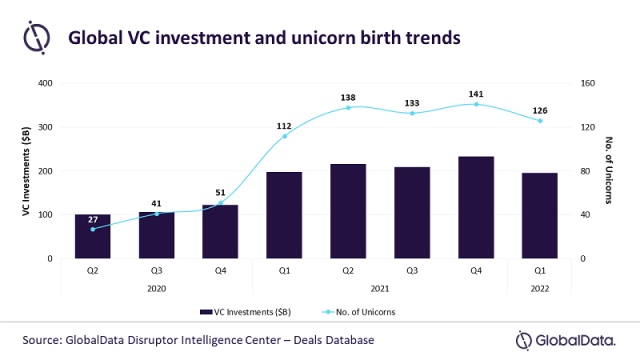 North America accounted for around $95 billion in terms of VC deal valuation.

“The economy is struggling with the ripple effects of the Russia-Ukraine war coupled with supply chain challenges and capital market volatility. Considering such events which are pushing up the inflation and interest rates, the VC and unicorn markets can be termed as relatively strong,” said Abhishek Paul Choudhury, Senior Disruptive Tech Analyst at GlobalData.

The power and utilities sector registered a maximum YoY increase in investment value by 72 percent followed by the foodservice sector at around 63 percent. Industrial goods & machinery sector recorded nearly 66 percent nosedive followed by the automotive sector, which registered a decline of about 50 percent.

The notable technology themes that garnered attention during the quarter were digital media, artificial intelligence (AI), cloud, e-commerce, big data, and blockchain. Among the top 10 deals, fintech and digitalization broadly dominated the investments.

Although the birth of unicorns marginally declined as compared to the previous quarter, there was a 13 percent cumulative growth to a total of 1,092 and the valuation trend showed 13 percent QoQ growth. RealtimeBoard, ConsenSys Software, and RELEX were the top three companies in terms of valuation.