Apna, a professional networking and jobs platform in India, has raised $70 million in a Series B round led by Insight Partners and Tiger Global. 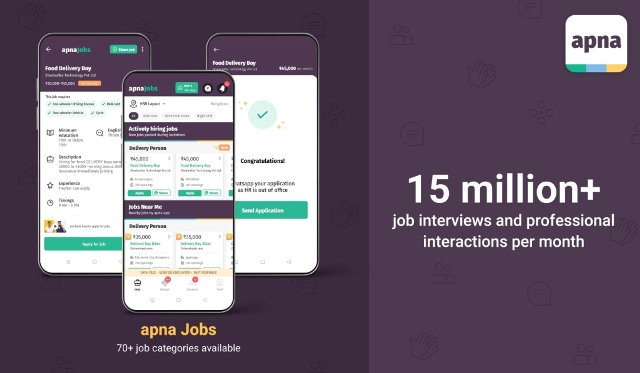 Apna has now raised over $90 million and is now valued at $570 million, within 16 months of product launch.

Apna will use the fund to strengthen its presence in existing cities and expand pan-India over the next 6 months. The team plans to double down on their edtech platform for skilling by continuing to invest in hiring talent and building world class engineering and product capabilities.

Apna plans to expand to high potential international markets such as Southeast Asia and the United States in the coming year.

“Over the last month itself Apna has facilitated more than 15 million job interviews and work related conversations where users have helped each other to start a business, find a gig or learn a new skill,” Nirmit Parikh, Founder and CEO of Apna.

The app comprises 60+ communities for skilled professionals like carpenters, painters, field sales agents and many others. The app allows users to access local job opportunities, network with peers, practice for interviews, share their accomplishments, and gain new skills.