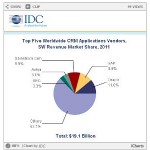 Oracle, SAP, Salesforce.com, Avaya and SEC are the top 5 CRM applications vendors in 2011.

While Oracle holds the lead in Asia/Pacific (excludingJapan), Salesforce.com is strong in North America andJapan. And SAP is the established leader in EMEA andLatin America.

Contact center applications market is expected to lose an additional 3.4 percent through 2016.

TheAmericasandJapanperformed better in the second half of the year than the rest of the regions.

Meanwhile, the emerging regions (CEMA, Latin America and Asia/Pacific (excludingJapan)) gained 0.7 percent of market share compared to 2010. The latter trend is likely to continue in the upcoming years driven by countries such asRussia,India,Chinaand most of Latin America and theMiddle Eastand Africa (MEA).

“The CRM applications market is poised on the threshold of a transformation with legacy installations being transformed into socially-aware applications environments. Early movement has been observed for the last several years. An influx of new social vendors and acquisitions of social CRM applications providers by established vendors augmenting their offerings for rapid market entry is invigorating the market,” said Mary Wardley, program vice president, CRM Applications, IDC. 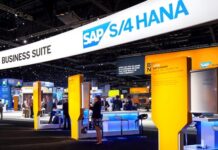