India has been ranked at number 7 in online banking hit by Trojans in 2013, said a Symantec report.

Besides India, U.S., Japan, U.K., Germany, Canada, Italy, Mexico and Brazil are the other countries, where Trojans are fighting for supremacy in the banking field, said Symantec.

The report says more than 1,400 financial institutions are targeted by financial Trojans.

The top 15 targeted financial institutions were targeted by more than 50 percent of the Trojans.

Institutions in 88 countries have been targeted; Continued expansion into the Middle East, Africa and Asia.

New institution types are being targeted outside of traditional online banking. 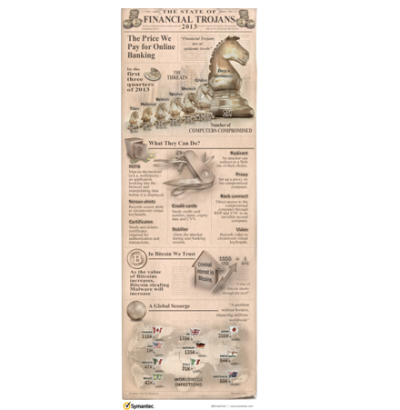 According to Symantec, in the first three quarters of 2013, the number of financial Trojans has grown by three times, representing nearly half a million infected computers per month that are susceptible to fraud.

To get a better understanding of the mechanics behind financial Trojans and the scale of their operations, Symantec analyzed over 1,000 recent configuration files belonging to eight online banking Trojans. These configuration files define which URLs the Trojan should attack and what attack strategy to use.

The number of infections of the most common financial Trojans grew to 337 percent in the first nine month of 2013. This represents nearly half a million infected computers per month that are susceptible to fraud, said Symantec in a blog post.

Attacks vary from simple user redirection to complex Web-injects, which can automatically conduct transactions in the background. The analyzed configuration files targeted 1,486 organizations in total. This highlights the wide distribution of the Trojans, which target everything that could yield a monetary profit for the attacker.

The most frequently attacked bank is located in the US and was present in 71.5 percent of all the examined Trojans’ configuration files. All of the top 15 targeted banks were found in more than 50 percent of the configuration files. This means that every second Trojan targets at least one of these banks. These high numbers might be because the targeted URLs are present as examples in some of the basic toolkits, which are sold with the Trojans.

Another reason could be that the Trojans simply still work against these firms, as not all financial institutions have moved to strong authentication yet. Of course, most financial institutions are aware of these cybercrime developments and are deploying new protection mechanisms to block such attacks. Unfortunately, new security measures take time and money to roll out and the attackers will always come up with new attack avenues. After all, social engineering attacks still work, since some people will always fall for a cleverly crafted story. We expect that we will continue to see attacks targeting online banking services in the coming year.