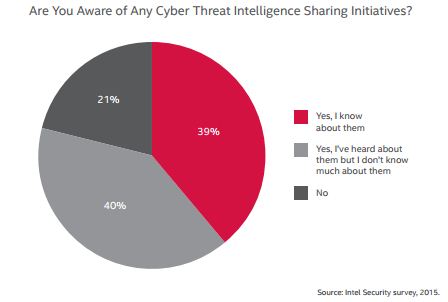 The survey of 500 cybersecurity professionals found that only 42 percent of respondents use shared threat intelligence, despite a rise in cyber threats as indicated in the Q4 threat statistics.

Almost all respondents using shared threat intelligence believe that it enables them to provide better protection for their company.

More than half, 59 percent, of survey respondents find such sharing to be “very valuable” to their organizations, while 38 percent find sharing to be “somewhat valuable.”

“Given the determination demonstrated by cybercriminals, CTI sharing will become an important tool in tilting the cybersecurity balance of power in favor of defenders,” said Vincent Weafer, vice president of Intel Security’s McAfee Labs group.

“But our survey suggests that high-value CTI must overcome the barriers of organizational policies, regulatory restrictions, risks associated with attribution, trust and a lack of implementation knowledge before its potential can be fully realized.”

Intel said sectors such as financial services and critical infrastructure stand to benefit most from such industry-specific CTI.

With regard to the willingness to share threat intelligence, 63 percent of respondents indicated they may be willing to go beyond just receiving shared CTI to actually contributing their own data, as long as it can be shared within a secure and private platform.

However, the idea of sharing their own information is met with varying degrees of enthusiasm, with 24 percent responding they are “very likely” to share while 39 percent are “somewhat likely” to share.

When asked why they have not implemented shared CTI in their enterprises, 54 percent of respondentssaid corporate policy as the reason. It was followed by industry regulations with the percentage of respondents at 24.

The remainder of respondents whose organizations do not share data report being interested but need more information (24 percent), or are concerned shared data would be linked back to their firms or themselves as individuals (21 percent). These findings suggest a lack of experience with, or knowledge of, the varieties of CTI integration options available to the industry, as well as a lack of understanding of the legal implications of sharing CTI.

According to it, ransomware accelerated again by the end of 2015, after slowing slightly midyear. Compared to the third quarter, new ransomware increaswed 26 percent.