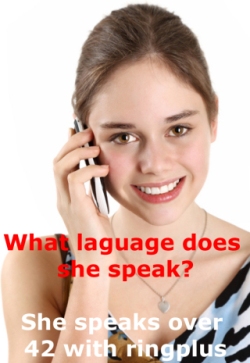 During an event hosted by Sprint, RingPlus team placed the first mobile phone call with their technology on the Sprint network that translated the initial part of the conversation from English into Spanish and then translated the response from Spanish back to English.

“Working with innovative carriers such as RingPlus to combine their ring back tone software with Sprint’s WMI platform and achieve such an amazing technological breakthrough demonstrates our commitment to ensure our resellers’ success. We are very proud of the end result,” said Bill Esrey, vice president, Sales – Sprint.

RingPlus says this translation technology will be available exclusively over their network on March 11, 2013.

“Seeing how smoothly our technologies integrated and the exciting discussions we’ve had with Sprint has confirmed that, not only did we choose the right provider in Sprint, but also the most inspiring. Thank you, Sprint,” said Karl Seelig, CEO & founder of RingPlus.

The company claims that being able to demonstrate it so quickly shows why they are industry leaders in Ring Back Tone Replacement technology. Once it is live on their network, the in-call translator will be available in 47 different languages and only one of the mobile devices involved in the conversation will need to be on the RingPlus network, meaning that the translator would be available from a RingPlus phone to a landline, other carrier network, or even internationally.