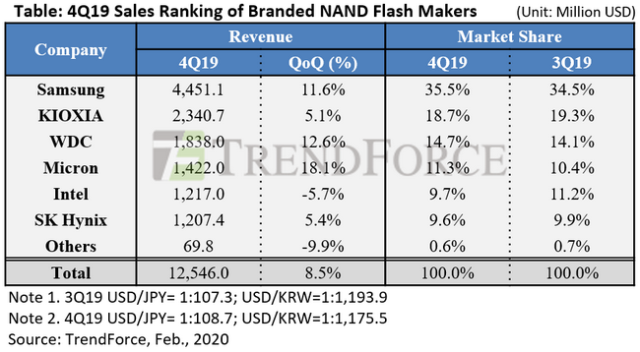 NAND flash contract prices made a successful rebound due to shortages caused by the power outage at Kioxia’s Yokkaichi production base in June. NAND flash revenue rose 8.5 percent to $12.5 billion.

NAND suppliers reduced their allocations to the wafer market and instead focus on shipping products with comparatively higher margins, according to the DRAMeXchange research division of TrendForce.

In 1Q20, the COVID-19 outbreak may have an impact on the consumer electronics supply chain, including smartphones and NBs; therefore, total quarterly bit shipment is projected to possibly post a minor decline or flat trend. NAND flash revenue is expected to at least maintain the same level as 4Q19.

The demand for Samsung’s SSDs far exceeded its supply – driven by data center demands. Samsung’s bit shipment rose by almost 10 percent. Samsung posted an increase in ASP because of the increase in contract prices and the reduction of NAND flash supply in the channel markets. Samsung’s NAND flash revenue rose 11.6 percent to $4.451 billion.

Samsung is continuing to decrease the planar NAND production capacity at Line 12. Its newly expanded second semiconductor plant in Xi’an is operating on schedule and without production delays for now despite potential issues in expansion schedule due to the COVID-19 outbreak.

SK Hynix’s cutbacks in planar NAND capacity and the corresponding addition in 3D NAND capacity are expected to result in a lower year-end production capacity compared to the start of 2020.

SK Hynix is also planning to release QLC products this year, but it will take longer to see client adoption of QLC SSDs, since SK Hynix’s product mix is still primarily targeted at the mobile market.

Kioxia’s bit shipment increased by almost 10 percent thanks to its capacity recovery after the Yokkaichi power outage and to growing demands for data center and PC SSDs. Its ASP also rose 5 percent, due to increases in contract prices caused by product shortages. Kioxia’s revenue rose 5.1 percent to $2.341 billion.

Kioxia’s Iwate-based K1 fab will begin operations in 1H20 and produce 96L/112L products. The added production capacity will be used to compensate for capacity losses from raising the number of cell layers in Kioxia’s Yokkaichi site.

WD is continuing to invest in its Iwate-based K1 fab. But the primary function of the added capacity from K1 is meant to offset capacity loss from the Yokkaichi fab’s process nodes and layer improvements, so total output will remain unchanged.

Micron’s bit shipment rose by almost 15 percent. Micron achieved a minor growth in ASP due to the increase in market prices and the adoption of profitable product mix. Micron’s revenue grew by 18.1 percent to $1.422 billion.

Micron is focused on improving its process nodes and microarchitectures this year; its 128L products are expected to enter mass production in 2H20.

Intel benefitted from the strong SSD demand from data centers. Intel responded to its clients’ preemptive pull-in demand with existing stock in 3Q19, in turn raising its 3Q19 bit shipment considerably, by over 50 percent. 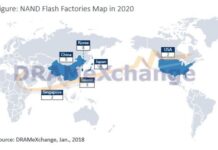 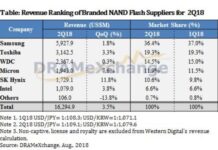