U.S. prosecutors has arrested a Florida man accused of importing fake Cisco networking equipment that if authentic would be worth more than $1 billion, and reselling the fake products on Amazon.com, eBay and elsewhere.

Onur Aksoy, 38, of Miami, allegedly worked with suppliers in China and Hong Kong from 2013 to 2022 to import tens of thousands of fake devices through at least 19 entities in New Jersey and Florida dubbed the Pro Network.

The U.S. Attorney’s office in New Jersey, which announced the arrest, said Aksoy then resold the devices to unwitting customers, with the devices’ origins having been disguised with fake Cisco labels, packaging and documentation, Reuters news report said.

The scheme netted about $100 million of revenue and several million dollars of illegal profit for Aksoy, who allegedly bought the fake devices for as much as 99 percent less than Cisco’s recommended retail prices.

Cisco Systems sent seven cease-and-desist letters to Aksoy, who in response had his lawyer at the time provide forged invoices at least twice.

Aksoy was charged with 11 criminal counts including mail fraud, wire fraud, trafficking in counterfeit goods, and conspiracy. Each count carries a maximum prison term of between five and 20 years. 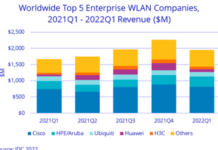