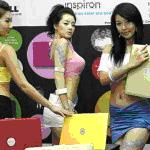 Infotech Lead Malaysia: The value of the B2B IT market inMalaysia reached $75.5 million in the first three months of 2012.

During the first three months of 2012, nearly 120,000 units of IT hardware — laptops, desktop computers, monitors, and printers were sold in the corporate IT market.

According to GfK tracking of B2B IT hardware sales, laptops and monitors made up the greatest proportions of the transaction volume at 37 and 32 percent, while in value terms, laptops reigned as the biggest contributor at 59 percent, trailed distantly by desktops at 32 percent.

The corporate laptop market is worth nearly $45 million, making it the key IT device making up nearly three-fifth (59 percent) of the entire B2B pie.

Overall laptop sales in January to March reached nearly 44,000 pieces, selling at an average price of $1023 each. The laptop segment outperformed desktops by over 42 percent in volume and a whopping 87 percent in value sales. January takings alone contributed 42 percent to the overall sales volume in first quarter.

A similar trending was also reflected in the other categories, where the start of the year registered heightened demand and raked in the most volume sales before declining substantially in the following month.

“Similar to many other Asian countries, Malaysia’s B2B IT market is expected to experience lower sales during the Lunar New Year festive period where corporate resellers tend to shut down their businesses; some for an extended period of time,” Chan added.

GfK reports showed that corporate IT sales revenue in February dipped by some 26 percent compared to the previous month, but sales generally started to pick up in March.

GfKMalaysiahas been conducting retail audit tracking of technical consumer goods, including the IT sector, for nearly 16 years. The company commenced tracking of B2B sales in the IT sector in 2012, covering transactions between resellers’ sellout among corporate, government and small and medium businesses.

According to GfKMalaysia, the corporate laptop market inMalaysiais estimated to constitute only a quarter (25%) of the country’s total dollar sales when combined with the retail sector. Meanwhile, printers and desktop PCs are the main revenue generators, contributing 60 and 59 percent to the respective overall market for the full year of 2012.

It is worth highlighting that GfK B2B corporate sellout measurement among the public and commercial sectors clearly reflects the acquisition of more premium and higher-end products, as revealed by the nearly twofold average product selling price compared with the retail sector.

GfK foresees higher spending from the government and government linked companies that will continue to boostMalaysia’s total IT industry’s market value considerably.