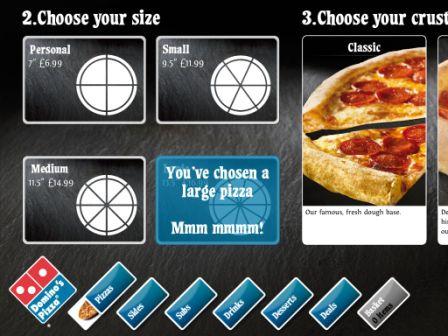 Domino’s mobile ordering tool is already available for both the Apple iPhone and Android phones.

The Domino’s Pizza app for Kindle Fire and other Android devices extends many of the features of Domino’s online ordering platform, including: coupon search, full national menu, store locator and the ability to follow your order with Domino’s Tracker.

Users can download the app directly from Kindle Fire and Android phones and tablets via the Amazon Appstore for Android.

“Technology has become vital at Domino’s Pizza, and we’re thrilled to bring our ordering experience to Kindle Fire. We’re always looking for new ways to bring Domino’s ordering capabilities to people wherever they are, and the new app for Kindle Fire makes it easy for people to take just a few minutes away from reading a book or watching a movie to order a hot, delicious Domino’s pizza,” said Russell Weiner, Domino’s Pizza chief marketing officer.

Domino’s will release an update to its Pizza Hero iPad app in the coming weeks targeting 22 international markets. The app allows people to assume the role of a Domino’s Pizza chef by stretching, saucing and topping a pizza.

Pizza Hero has been downloaded more than 500,000 times and more than 12 million virtual pizzas have been cooked as part of the game.

Domino’s operates a network of 9,810 franchised and company-owned stores in the United States and over 70 international markets.

During the first quarter of 2012, Domino’s had global retail sales of nearly $1.7 billion, comprised of over $830 million domestically and nearly $855 million internationally.

Domino’s Pizza had global retail sales of over $6.9 billion in 2011, comprised of over $3.4 billion domestically and over $3.5 billion internationally.