The new products extend the benefits of gigabit Wi-Fi to broader markets at lower price points and with higher performance than competitive offerings.

Both of the new access points support data rates of up to 867 Mbps as compared to competitors’ 3X3 solutions that are typically limited to 600 Mbps data rates. 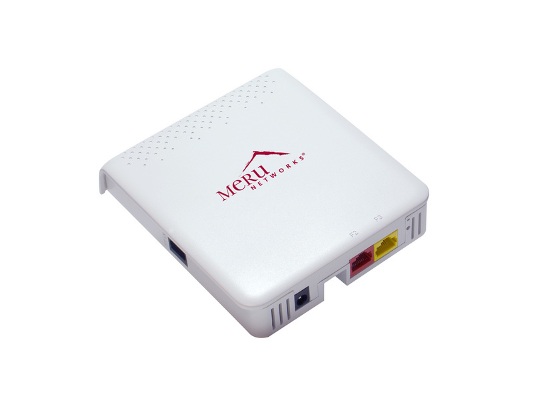 Meru’s higher data rates are enabled by the Meru MobileFLEX architecture, which supports full use of the 80MHz channel specified by the 802.11ac standard. Others recommend narrower 40 MHz channels in enterprise-wide deployments, which reduce their access points’ data rates.

Meru will target hotel guests, cruise line as well as resident college and university students with the new AP122 Wall Plate. The AP122 is priced at $595 and it offers up to 1.2 gigabit-per-second data rates.

The price of Meru AP822 is $895 in the U.S. market. It delivers up to 1.2 gigabit-per-second data rates. Meru will target schools, hospitals, hotels and other businesses seeking to give end users the high-performance of 802.11ac Wi-Fi at a lower cost than existing 3X3 solutions.

Meru 802.11ac solutions run on standard 802.3af Power of Ethernet (PoE). This lowers total cost of ownership, eliminating the need for customers to upgrade their entire Ethernet switching infrastructure to support 802.3at, or PoE+, as currently required by most Meru competitors when deploying 802.11ac.

In addition, Meru 802.11ac access points support devices on both the 5GHz and 2.4GHz bands and increase the performance of legacy clients, with Meru customers citing as much as 40 percent increased throughput when using 802.11n clients on its 802.11ac networks.

Maine School Administrative District 49 in Fairfield, Maine is one of the customers of Meru Networks.

“We recently issued more than 2,000 Apple iPads and MacBooks, Google Chromebooks and other mobile devices to teachers and students, all of which are regularly used for streaming voice and video. The increased throughput and capacity enabled by Meru 802.11ac solutions is attractive to us, and the attractive price point of the AP822 makes it an obvious choice for our upcoming WLAN expansions,” said Stephanie Vargas, assistant technology coordinator for Maine School Administrative District 49 in Fairfield, Maine.

“The Meru AP122 wall plate access point will give us the highest performing in-room Wi-Fi in the industry, easily supporting video and voice streaming on each of the two-to-three mobile devices that our recreational guests now commonly bring with them when they visit,” said Wael El Behi, general manager, Hawthorn Suites by Wyndham, Dubai.

Cupertino Inn and the Grand Hotel in San Jose, Calif is tapping Meru AP822 to address their customer demands.

“Most of our guests are employees of Apple, Google, Yahoo and other nearby companies, each of whom carry a minimum of three mobile devices and work from their rooms using streaming voice and video almost non-stop. The increased speed and capacity that the Meru AP822 enables will help us continue to ensure an excellent guest experience, its price — lower than some legacy 802.11n access points — makes moving to 802.11ac a no-brainer,” said Barbara Perzigian, general manager of the Cupertino Inn and the Grand Hotel in San Jose, Calif.

Meru Networks and Westcon offer Wi-Fi as a service