“Always near the top of our hosted VoIP scorecard, 8×8 is taking the #1 spot by building on a solid financial position and continued focus on service enhancements and geographic expansion,” said Diane Myers, principal analyst for VoIP, UC, and IMS at Infonetics Research.

The report said Verizon is the market leader for IP connectivity for a sixth consecutive year, followed closely by XO. These two North American communication vendors are mainstays, leading in service development and customer adoption.

West leaped from 4th place in last year’s scorecard to the number-2 position this year, resulting from strong demand for its Cisco-based solution.

The competitive landscape for hosted VoIP services continues to be impacted by the traditional UC vendors, leading to fragmentation, said Infonetics. 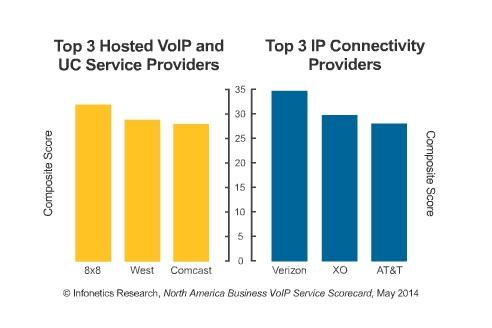 Mitel debuted in this year’s scorecard, due in part to its merger with Aastra.

The IP connectivity market is driven by SIP trunking and led by a handful of strong providers followed by a large number of companies competing in a market where differentiation is difficult.