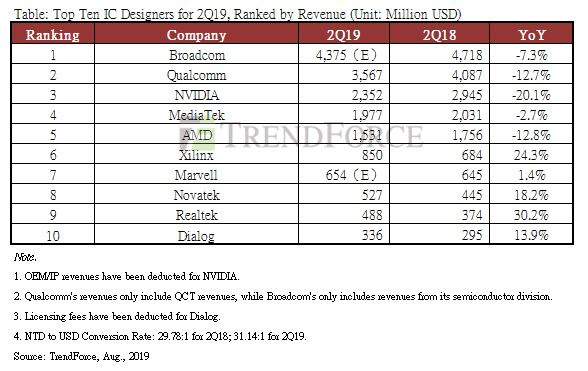 Revenues of top ten IC design companies have been hit for 2Q19 due to the U.S.- China trade war, mounting inventory levels along the supply chain and less-than-satisfactory global demand for consumer electronics, says a report from TrendForce.

Weak Chinese demand, crippled by the US-China trade war and leading China’s systems suppliers to reduce pull-ins for components, put the revenues of Broadcom and Qualcomm, for whom China forms the main market, on a YoY slide in 2Q19, the report said.

NVIDIA registered the largest decline among the five with a fall of 20.1 percent from same period last year. This is also the first time in three years that Nvidia’s seen YoY revenue declines for three consecutive quarters.

However, Nvidia’s declines in 2Q19 narrowed somewhat compared to 1Q19, and may continue to narrow in 3Q19 thanks to effectively reduced inventory levels.

Mediatek had been using the 12nm process for its mobile processor product line since 2018, greatly enhancing cost structure and adding more value to the product, whereas UNISOC implemented Cortex-A55 and A75 CPUs in its low-mid range processors, effectively presenting a wider choice of products for clients and subsequently placing pressure on Qualcomm, who now has a new competitor to deal with in the low-mid range market, the report said.

Mediatek’s revenue for 2Q19 came to NT$61.567 billion, a 1.8 percent growth over 2Q18, while its gross profit margin continued to recover, yet this growth actually turns into a 2.7 percent YoY decline after conversion into USD due to conversion rates.

Although Mediatek and Qualcomm were both likewise affected by the weakened global demand for smartphones, Mediatek continued to manufacture its line of good value processor products for cell phone applications with its 12nm process. These products have already entered the low-mid range markets, further constricting Qualcomm’s cell phone chip shipment performance.

While AMD performed well in the processor and datacenter segments, the weak sales for GPU products, blockchain and semi-customized products dragged down revenue performance. And while being a US chip giant, Xilinx boasts a highly diversified clientele, and saw growths in the industrial, telecommunications and automotive segments, even though it was slightly affected in the datacenter segment.

Marvell, on the other hand, benefited from the increasing demand in the telecommunications market, and grew together with Xilinx against the falling revenue trend as many US based IC design companies gave less-than-satisfactory performances.

Despite entering the traditional peak season of the semiconductor market, the US-China trade dispute runs its course without any signs of slowing down in 3Q19 looking forward, and whether major IC design companies may maintain growth will still depend on whether their sales strategies will be able to distribute market risks presented by the US-China trade dispute, the report said.