Despite increasing dependence on digital services, most consumers in India still do not perceive organizations to be trusted data stewards, says a new study conducted by IDC in partnership with Microsoft.

Only two out of five (41 percent) of consumers in India trust organizations offering digital services to protect their personal data, says an IDC-Microsoft study.

The study reveals there is still a considerable trust gap that needs to be addressed, and so businesses need to do a lot more to understand what drives consumer trust and focus on how they can build trust and make it a key competitive advantage for their digital services, said Keshav Dhakad, Microsoft India.

Close to half of the consumers (46 percent) in India have had their trust compromised when using digital services. 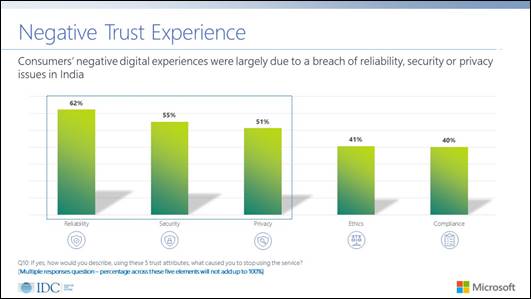 Moreover, only 7 percent of consumers prefer to transact with an organization that offers a cheaper but less trusted digital platform. Close to 73 percent consumers highlighted that they would recommend a trusted digital service to others even if the cost is higher.

The study, which was conducted amongst 6,400 consumers across 14 markets, surveyed 459 consumers in India. It asked respondents to provide their opinions on the five elements of trust jointly defined by IDC and Microsoft – namely privacy, security, reliability, ethics, and compliance– when using digital services.

The study revealed that consumers feel that all five elements of trust are almost equally important to them. Specifically, security (86 percent), privacy (85 percent) and compliance (82 percent) emerged as the top three most important elements.

Consumers also have the highest expectations of trust from financial services institutions, followed by education institutions and retailers.

Ranganath Sadasiva, director – Enterprise Solutions, IDC India, said, “As competition between digital services becomes more intense and global in nature, advocacy through word of mouth can be a strong differentiator for the organization and a shot in the arm for the brand.”

The study further revealed that not just organizations providing digital services, but the broader industry, including institutions which set rules and regulations, should be responsible for building trust.

Consumers in India feel that technology companies (46 percent) followed by governments (34 percent) should be responsible for building trust, indicating the need for a stronger partnership between the private and public sector. ​

When it comes to fostering trust in AI technologies, consumers feel that the technology companies (43 percent) and government (39 percent) should take the lead in ensuring AI is used in a trusted manner.

Microsoft suggests a broader debate on ethics, policy and regulation that involves the appropriate stakeholders, including the government and technology companies, would be required to address the trust gap.

Further, these dialogues would need to be backed by actions, including forging closer partnerships and facilitating greater knowledge exchange and industry best practices. 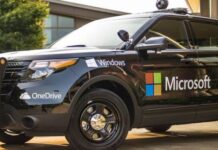 Microsoft in pact with CIS to increase election security in US