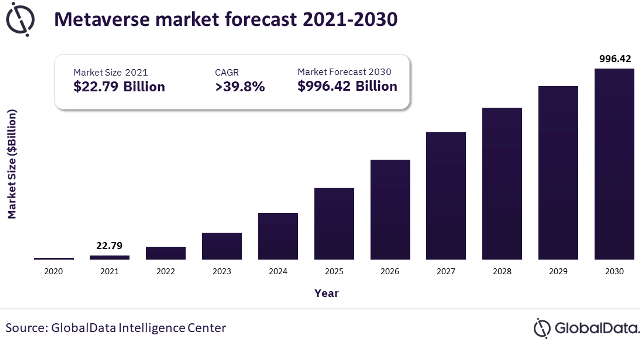 Several enterprises are investing in the metaverse technology for engagement with customers, brand awareness expansion, and identification of new revenue streams, says GlobalData in its report.

Banks such as JP Morgan and HSBC have already entered the metaverse via Decentraland The Sandbox, respectively.

JP Morgan opened a customer lounge named Onyx to boost social engagement while HSBC purchased a plot in The Sandbox, aiming to use it to engage with sports, esports, and gaming fans. Trading start-up eToro offers MetaverseLife, a smart portfolio for investors interested in stocks, cryptocurrencies, and other projects within the metaverse.

Gucci has partnered with Roblox during the pandemic and created a Gucci garden, featuring games that allowed users to win limited-edition Gucci accessories. Gucci has also sold the limited-edition Dionysus Bag for $4,100 in Robux (the virtual currency in Roblox), exceeding the price of a real bag. Gucci is also active on The Sandbox and Decentraland with NFTs and virtual land.

Media and entertainment market has captured a sizeable revenue share of the metaverse market via music and concerts.

A couple of notable ones among them are the dead mouse performance at metaverse festival in decentraland and the grimes-hosted concert that closed out meadowverse fashion week. Travis Scott in Fortnite had put on a concert which showed $20 billion, including merchandise, versus the 1.7 billion from the regular show.

Companies are focusing on leveraging critical technologies covered in the metaverse theme such as Blockchain, machine learning, AR and VR, AdTech, payment platforms, enterprise applications, gaming, data governance, and others. 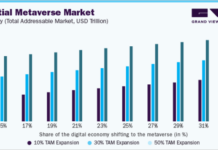