Global spending on the digital transformation (DX) of business practices, products, and organizations is forecast to reach $2.8 trillion in 2025, more than double the amount allocated in 2020.

DX spending will have a compound annual growth rate (CAGR) of 16.4 percent over the 2021-2025 forecast period as organizations pursue a holistic digital strategy for people, processes, technology, data, and governance, IDC said.

The latest IDC report said that investment in robotic manufacturing will grow to $120.6 billion in 2025, followed by autonomic operations and 360-degree customer and client management at $90.9 and $74.7 billion, respectively.

The DX use cases with the fastest spending growth will be virtualized student workspaces (43.8 percent CAGR), mining operations assistance (39.1 percent CAGR), and augmented design management (34.5 percent CAGR). Of the more than 300 DX use cases identified by IDC, only five will have five-year CAGRs of less than 10 percent over the forecast period.

The industries that will see the largest DX spending throughout the forecast are discrete and process manufacturing, followed by professional services and retail. Combined, the two manufacturing industries will account for nearly 30 percent of all DX spending, totaling more than $816 billion in 2025, IDC said.

The industries that will experience the fastest growth in DX spending over the 2020-2025 forecast are construction (21.0 percent CAGR), securities and investment services (19.2 percent CAGR), and banking (19.0 percent CAGR). All 19 industries covered in the DX Spending Guide are forecast to deliver double-digit growth over the five-year forecast.

The United States will be the largest geographic market for DX spending, delivering roughly one third of the worldwide total throughout the forecast. Western Europe will be the second largest region for DX spending, following closely by China. China will also deliver the strongest year-over-year growth in DX spending with a five-year CAGR of 18.4 percent. Latin America will be the region with the second fastest growth with a 17.5 percent CAGR.

IT spending by enterprises remains stable in Asia Pacific: IDC 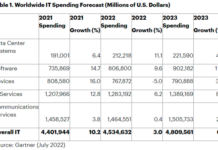