IT investments by major industry verticals such as BFSI, manufacturing, retail and e-commerce were the main growth drivers for the increase in H1 2014. 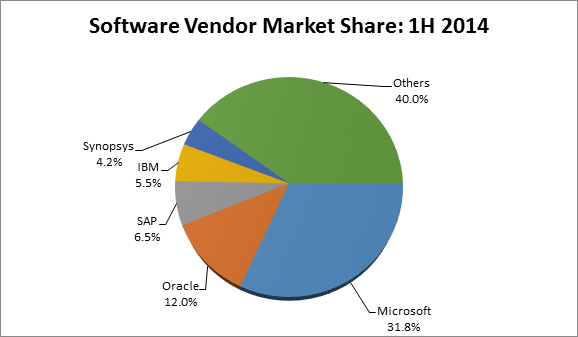 Few big software vendors could close some of the major deals in H1 2014 which were delayed due to economic and political uncertainties.

Virtualization and cloud players such as VMware, Salesforce and Red Hat generated business owing to greater market awareness while database and analytics players such as Teradata, Informatica, Oracle, Qlik and others registered double digit growth due to widespread demand for customer insights and analytics.

Entertainment, Retail & Ecommerce, Education, Hospitality etc will be some of the sectors to watch out in future. CIOs are looking at IT investments for process improvements, growing business opportunities and improving customer experience.

Government initiatives such as Mobile Seva, Digital India, Pradhan Mantri Jan Dhan Yojana and the likes will be instrumental in triggering adoption of software solutions. Launch of various schemes and policies is expected to catalyze software uptake by Manufacturing, Retail, Travel & Tourism and BFSI in the coming 2-3 years.

“Large as well as SMB customers are looking at ways to curb their capital expenditure and are keen to embark on the cloud journey. This has led the vendors to make their licensing policies more flexible and easier so that existing customers could smoothly transition to a cloud environment,” said Shweta Baidya,  senior market analyst, Software, IDC India.

IDC noted a rise in adoption of open source software especially among the SMB segment which is shying away from blocking its capital on expensive proprietary software. Small and Co-operative banks, Retail and Telecommunication sectors are looking at customized solutions based on open source platform for greater flexibility and cost reduction.

Earlier, IDC said the India software market grew 9.9 percent in 2013 to $3.78 billion. The slow growth in 2013 was due to multiple factors including impending elections, delayed payments, lower profits from government sector investments and rupee depreciation among others.