The decline was driven by a slowdown in Telecom spending. Meanwhile, professional services, resource and education sectors had year-on-year growth in their storage deployments.

Banking, Professional services and Telecom organizations also contributed positively. IDC said increased adoption of All Flash Arrays (AFA) was seen across verticals due to better performance at an affordable price.

IDC noted that all the leading players are facing tough competition in the market due to intense price war from small storage players.

According to Dileep Nadimpalli, Senior Market Analyst, Storage, IDC India, “We are expecting increased spending from 3rd party datacenter players and cloud providers due to increased demand for cloud hosting services. Across verticals, organizations are opting for cloud not only for ease of management and cost advantage but also for faster time to market.”

Further findings showed EMC continued to lead the market but witnessed a drop in its market share from 33.8 percent to 28.4 percent.

Dell witnessed growth due to uptake from professional services organizations.  HPE also had growth due to increase in 3PAR portfolio across verticals. 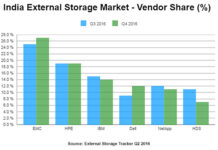