Overall spending on information and communications technology (ICT) across the Middle East, Turkey, and Africa (META) will grow at 2.7 percent to $229 billion in 2022, according to IDC report.

IDC revealed that it expects telecommunications spending to increase 3.2 percent to $137 billion, with IT spending set to grow 2 percent to $92 billion.

Spending on security (hardware, software, and services) will grow 7 percent to top $3.76 billion

SaaS apps will account for 41 percent of public cloud software spending, followed by IaaS at 29 percent, systems infrastructure SaaS at 18 percent, and PaaS at 12 percent

Spending on RPA software will grow 47.5 percent to cross $159 million

Spending on Big Data analytics will grow at 8.1 percent to reach $3 billion

Crawford Del Prete, IDC’s global president, said: “One in two companies worldwide will generate more than 40 percent of their revenues from digital products and services by 2023.”

“Organizations across the region have significantly accelerated their digital road maps as a result of the pandemic, some by two years or more, and many have shifted to a digital-first strategy, aggressively leveraging technologies such as cloud, AI, digital infrastructure, IoT, and security, among others,” Jyoti Lalchandani, IDC’s group vice president and managing director for the META region, said.

IDC research shows that nearly 60 percent of medium-sized to large organizations in the META region have seen an increase in cost efficiencies through digitalization, while 47 percent have introduced new digitally augmented products and services and 46 percent have realized increased value from their data through new insights and enhanced decision making. 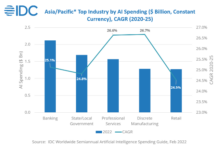 Spending on Artificial Intelligence to touch $32 bn in 2025: IDC 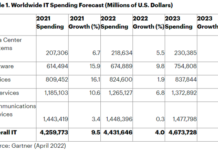