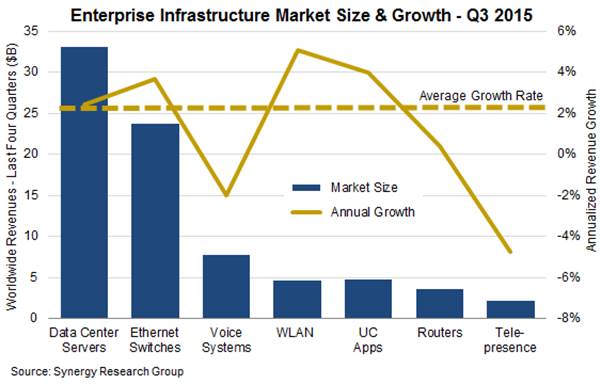 Cisco is the market leader in six of the seven IT infrastructure segments in 2015. Cisco is ranked fifth in the global data center server market.

The aggregate market share of Cisco in the seven segments over the last four quarters was 33 percent against 32 percent in the preceding four quarters.

HPE is the leader in data center servers and is the number two ranked vendor in both Ethernet switching and routers. Following the acquisition of Aruba, HPE is also now the second ranked vendor in enterprise WLAN.

The aggregated market share of HPE over the four quarters was 18 percent against 17 percent in the prior year.

“Across hardware-oriented product areas HPE is the only challenger to Cisco’s dominance and it has been steadily increasing its share of the market,” said Synergy Research Group’s founder and Chief Analyst Jeremy Duke.

Data center servers comprise the largest segment of the market and revenues here grew by over 2 percent.

Ethernet switches are the second-largest segment and they experienced growth of almost 4 percent.

WLAN grew the most while the enterprise voice market remains in the doldrums and telepresence continues to suffer due to aggressive price competition and market disruption. 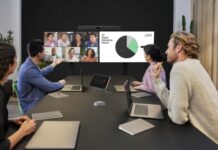 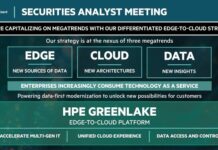