In the 10GbE segment, Cisco market share increased to 63.7 percent in Q3 2014 from 61.3 percent in the previous quarter, but dipped from 65.3 percent in Q3 2013. Cisco’s telecom service provider and enterprise router revenue declined 10.9 percent year over year. 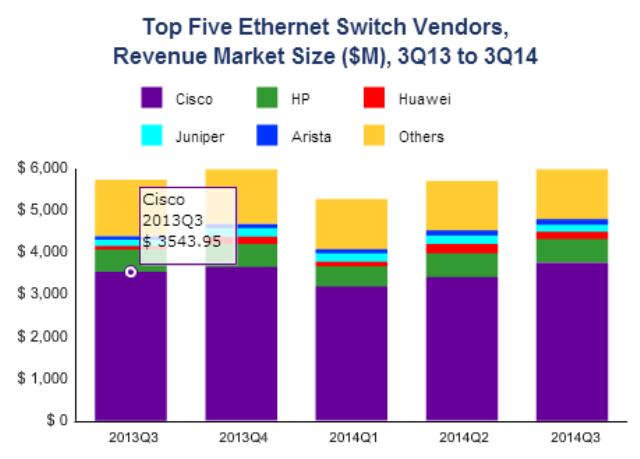 The Ethernet switch market in Middle East and Africa (MEA) rose 12.4 percent, fuelled by gains in the larger regional economies, such as Saudi Arabia (30.6 percent), the United Arab Emirates (22.1 percent) and Qatar (51.2 percent).

North America’s Ethernet switch market grew 5.2 percent, on the strength of the US market, and Western Europe increased 4.8 percent.

“Given increasingly complex network workloads in both the datacenter and the campus, the 10Gb Ethernet switch market continues to grow steadily as average selling prices decline. 40Gb Ethernet is also taking off in the datacenter, which will create a robust growth engine for the overall market for several years to come,” said Rohit Mehra, vice president, Network Infrastructure at IDC.