In 2013, Asia Pacific made up the biggest share of Ethernet services revenue and will continue to do so through 2018. 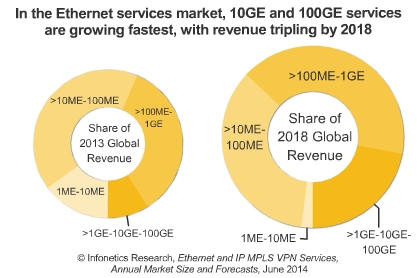 “Ethernet services will be growing about twice as fast as IP MPLS VPNs through 2017,” said Michael Howard, principal analyst for carrier networks and co-founder of Infonetics Research.

The biggest change will come in the types of security services offered over IP MPLS VPNs and Ethernet services—for example, firewalls, SSL VPNs, intrusion detection, parental controls—and the pace at which they’re made available.