Synergy Research Group’s detailed review of enterprise IT spending over the last ten years shows that annual spending on cloud infrastructure services has gone from virtually zero to almost $100 billion. 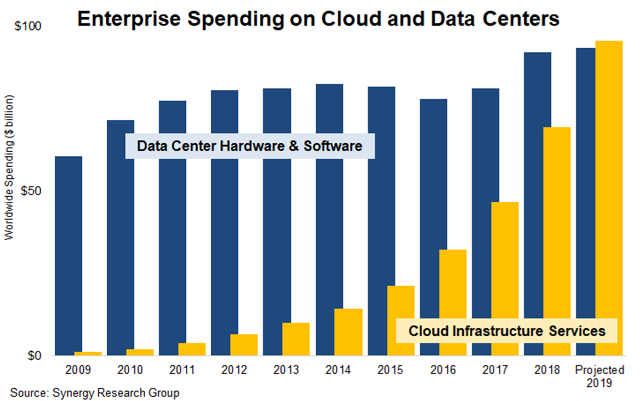 Enterprise spending on data center hardware and software has been stagnant through much of the decade.

Data center spending jumped in 2018 even though server unit shipments remained flat, thanks to more richly configured and higher-priced servers. Despite that 2018 increase in data center spending, growth in cloud spending did not miss a beat in 2018 and grew again by almost 40 percent in 2019.

Over the decade, average annual spending growth for data center was 4 percent (mostly due to the first three years) and for cloud services was 56 percent. 2019 will mark the first time that enterprises spend more on cloud services (IaaS, PaaS and hosted private cloud) than they do on data center equipment.

Based on spending in Q1-Q3 and its forecast for Q4, Synergy projects that 2019 spending on data center hardware and software (comprising servers, storage, networking, security and associated software) will be over $93 billion.