Cloud infrastructure services spending increased 32 percent to US$39.9 billion in the last quarter of 2020, following heightened customer investment with the major cloud service providers and the technology channel. 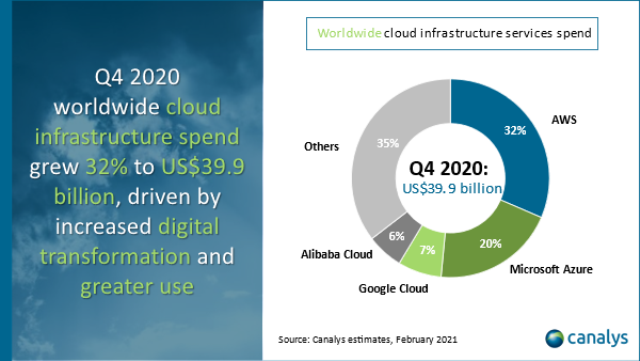 Total expenditure was over US$3 billion higher than the last quarter and nearly US$10 billion more than Q4 2019 according to Canalys data. This is again the largest quarterly expansion in dollar terms, as continuing pandemic restrictions drove intense demand for cloud to support remote working and learning, ecommerce, content streaming, online gaming and collaboration.

Cloud providers are extending their investments in channel partnerships to maintain high demand rates, and support customers, which will be critical for implementing projects in 2021 and beyond.

For full-year 2020, total cloud infrastructure services spending grew 33 percent to US$142 billion, up from US$107 billion in 2019. Demand was higher than expected, despite an initial slowdown in large consultative-led projects.

Amazon Web Services (AWS) was the leading cloud service provider again in Q4 2020, accounting for 31 percent of total spend. After a mixed Q3 in terms of customer performance, AWS had a resurgence in customer investment. This fueled 28 percent growth year on year for AWS in cloud in Q4 2020.

AWS is making investments across its global partner ecosystem to sustain its momentum, including greater support for ISVs, launching new vertical partner competencies, further expansion into distribution to boost SMB adoption, and new partnerships as it extends its hybrid cloud strategy.

Microsoft’s Azure growth rate accelerated once again, up by 50 percent to boost its market share in the global cloud services market to 20 percent.

Microsoft has focused on driving Azure consumption across all customer segments through annuity sales programs and customer success investments, as well as targeted incentives for its global partner channel. It has also benefited from continued high demand for Teams, Windows Virtual Desktop and other Microsoft services running on Azure as lockdowns tightened.

Google Cloud was the third largest cloud service provider in Q4 2020, with a 7 percent share. It reported growth of 58 percent in Q4 2020, as it pushes its ‘open cloud’ strategy emphasizing sovereignty, sustainability and multi-cloud management, and maintains a focus on its six target vertical industries.

It has aligned its sales force and channel to these industries as it builds a partner network with industry-specific expertise and deep specializations in its priority solutions, such as machine learning, analytics and data management.

Alibaba Cloud grew 54 percent in Q4 2020 to account for 6 percent of the total market. It remained the leading cloud service provider in the Asia Pacific region, including China.

It updated its hybrid cloud strategy during the quarter, with the launch of its Hybrid Cloud Partner Program and on-premises appliances targeting small and medium-sized businesses. The program will enable partners to plan, design and resell Alibaba Cloud services with free licenses and unlimited CPU cores.