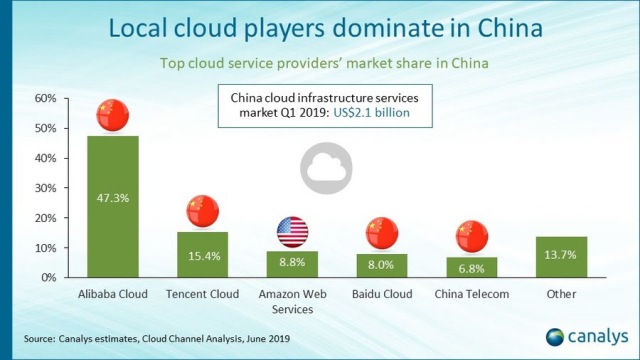 Total cloud infrastructure services spend in China reached US$2.1 billion for the first time in Q1 2019, says the latest research from Canalys.

With this, China accounted for 9.2 percent of the worldwide total, making it the second largest market behind the US at 48.4 percent.

Amazon Web Services (AWS), Microsoft Azure and Google Cloud dominate globally but this is not the case in China. Thanks to the regulations, cloud service providers headquartered in China account for four of the top five in the country.

Alibaba Cloud led in Q1 with 47.3 percent of the market, followed by Tencent Cloud with 15.4 percent. AWS was third, accounting for 8.8 percent, closely followed by Baidu Cloud (8.0 percent) and China Telecom (6.8 percent).

Cloud infrastructure services spending in China has benefited from the largest population of Internet and smartphone users worldwide, fueling use of digital consumer services, Canalys said.

“Alibaba is the leading ecommerce platform in the country, while Tencent leads in social media with WeChat, and Baidu is the leader in online search, all underpinned by cloud computing, according to an official at Canalys,” said Daniel Liu, Canalys research analyst. “This has driven significant investment in distributed data centers across the country to support increasing customer demand and the launch of new services, and to maintain high levels of availability.”

Government organizations have been active cloud adopters, valuing it as a core component to support data-intensive projects, such as secure and smart cities and e-government services. “The combination of cybersecurity policies and requirements for data localization, as well as the China Telecommunications Regulation, has helped to accelerate the growth of home-grown cloud service providers.” added Liu.

Canalys expects that the current trade issues between China and the US will amplify the home-grown services further. Internationally, the Chinese providers continue to expand, especially in Southeast Asia, the Middle East and parts of Europe.

“If the US-China relationship worsens, countries around the world will not only be forced to decide between Chinese or non-Chinese infrastructure for 5G networks, but also for the roll-out of cloud infrastructure services,” Liu said.