Amazon Web Services (AWS) is the leader in the public cloud services market in all four of the world’s major regions, Synergy Research Group said. 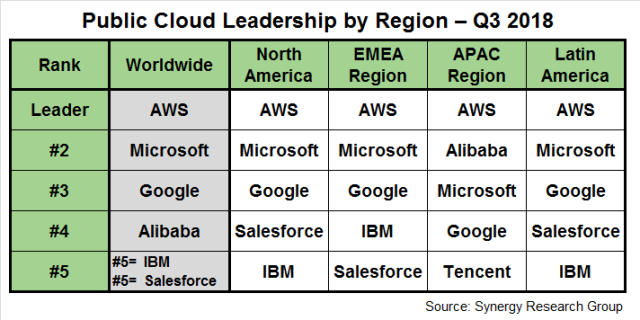 The ranking is based on public IaaS and PaaS service revenues during the third quarter of 2018.

Microsoft Azure is ranked second in three of the four regions.

Google Cloud is ranked third in three of them.

Alibaba is ranked second in the APAC region and fourth worldwide.

IBM, Salesforce and Tencent fill out the other top five slots in the regions.

Public IaaS and PaaS are the most prominent segments of the cloud infrastructure services market and account for the bulk of the revenues, with the balance coming from managed or hosted private cloud services.

AWS accounts for 40 percent of the public cloud market and the three leaders in aggregate account for almost 65 percent.

China now accounts for over a third of the total APAC market and its share of the regional total is increasing each quarter.