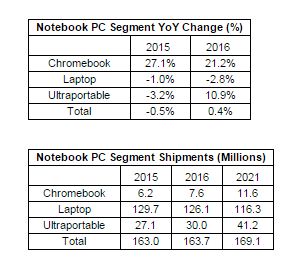 ABI Research said the PC market is going strong and shows no sign of slowing down in the immediate future.

It noted that 163 million notebook PCs shipped globally during 2015. The majority of shipments were laptops, which constituted nearly 80 percent of the category.

Jeff Orr, Research Director at ABI Research said: “The platform is continuing to evolve its designs to provide flexibility for productivity purposes, while also adapting its shape to support tablet-like, touch applications. Chromebooks and ultraportable PCs will continue to drive the most growth within the notebook PC market.”

ABI Research predicts that new, low-cost models will emerge from a broader range of system OEMs in 2016. It expects ultraportable PCs will constitute more than 24 percent of total notebook PC unit volume in 2021.

Furthermore, it anticipates Chromebooks to continue to dominate the education market in 2016, as school initiatives drive toward 1:1 student deployments with a technology device.

ABI Research predicts that Chromebooks will represent nearly 7 percent of all notebook PC shipments in 2021.

Orr noted that Intel architecture powers the majority of notebook PCs, and its introduction of the Core M SoC processor greatly enhanced the number of potential systems manufacturers that can participate in the 2-in-1 market.

Vulnerability Management market to expand by 2020