45 percent of North American enterprises are planning to deploy software-defined networking (SDN) in their data center in 2015, growing to 87 percent in 2016, said Infonetics Research.

This is despite serious concerns among enterprises about the maturity and use cases of SDN solutions. The report urges SDN vendors to do more education among large enterprises.

Infonetics Research said it in its research report called 2014SDN Strategies: North American Enterprise Survey that a majority of survey respondents are currently conducting data center SDN lab trials or will do so this year.

The top drivers for deploying SDN are improving management capabilities and improving application performance, while network interruptions and interoperability with existing network equipment are the leading barriers. 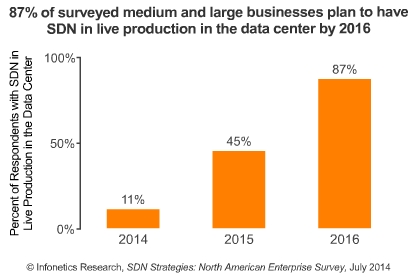 Meanwhile, enabling hybrid cloud is dead last on the list of drivers, a sign that SDN vendors have some work to do in educating enterprises that SDN can be an important enabler of hybrid cloud architectures.

On average, 17 percent of respondents’ data center Ethernet switch ports are on bare metal switches, and only 21 percent of those are in-use for SDN.

Nearly ¼ of businesses surveyed are ready to consider non-traditional network vendors for their SDN applications and orchestration software.

“SDN spells opportunity for existing and new vendors, and the time to act is now. The leaders in the SDN market serving the enterprise will be solidified during the next two years as lab trials give way to live production deployments in 2015 and significant growth by 2016,” said Cliff Grossner, directing analyst for data center, cloud, and SDN at Infonetics Research.

Enterprises are expanding the number of data center sites and LAN sites they operate over the next two years and are investing significant capital on servers and LAN Ethernet switching equipment. 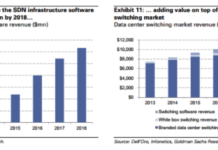