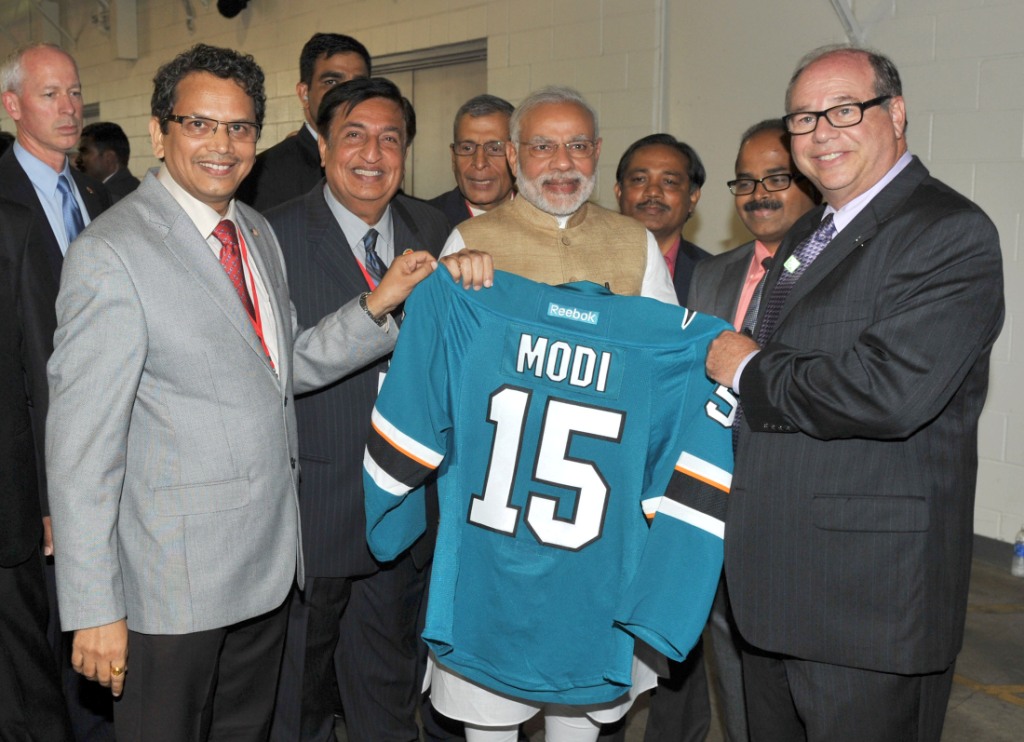 Prime Minister Narendra Modi arrived at the SAP Center for a Madison Square Garden-like reception by the Indian community here.

Modi had last year got a rockstar like reception at New York’s Madison Square Garden.

More than 45,000 people have registered for free passes for the event at the 19,000-seat SAP Centre organised by an Indian American group.

The organisers have promised that Sunday night’s Silicon Valley reception would rival that of the New York event where the people of Indian origin gave him a rock star like reception.

More than 45,000 people had registered for free passes for the event at the 18,000-seat SAP Centre. The rest will be watching the event on massive television screens that have been put up outside.

Prime Minister Narendra Modi saluted Indian techies for changing the image and perception of India with the magic of their fingers at the computers.

“Today there is a new image of India, a new perception of India in the world,” he said addressing a mammoth crowd of Indian diaspora at San Jose’s SAP Centre on Sunday night.

“People are moved to change their perception of the old India,” he said. “This is the magic of your fingers at the computers.”

“Sitting here, with your innovations, you are compelling the world to change. And the people who refuse to change, are soon going to become irrelevant.”

“The biggest thing, American citizens feel proud of is the people of Indian origin,” Modi said. “I congratulate you for this, I salute you.”

At one time there were discussions in India that the ‘brain drain’ has to stop, the prime minister said.

“No one thought the brain drain could also be converted into ‘brain gain’. And when the time comes, this will come to the use of ‘Maa Bharat’.”

Coming to California after 25 years Modi said: “I am experiencing a vibrant image of India in California today. I can see a lot of change.”

Modi recalled his first trip to the US last year when he was given a rock star like reception by the Indian diaspora at the Madison Square Garden in New York.

As promised by the organisers, the Sunday night reception indeed rivalled that of the New York event.

The crowds broke into chants of “Modi, Modi” as the prime minister dressed in white kurta and churidars and a light cream Nehru jacket walked to the stage of San Jose’s SAP arena.

Before he started speaking Modi was introduced to several US lawmakers from California, including the lone Indian American Congressman Ami Bera, whose parents hail from Gujarat and Democratic Minority leader and former House speaker Nancy Pelosi.

At the outset Modi paid tributes to Indian freedom revolutionary Shaheed Bhagat Singh on his birth anniversary and exhorted the crowd to respond to his call of “Vir Bhagat Singh” with “Amar Rahe Amar Rahe”.

More than 45,000 people had registered for free passes for the event organised by an Indian American group at the 18,000-seat SAP Centre.

The rest watched the event on massive television screens that were put up outside.

As at the Madison Square Garden, Modi addressed the people from a rotating stage at SAP Centre with comedian Rajiv Satyal and actress Ashvini Bhave hosting the event.

As at the Madison Square Garden, Modi will address the people from a rotating stage at SAP Centre with comedian Rajiv Satyal and actress Ashvini Bhave hosting the event.

Modi came to the event after a busy day starting with a townhall question and answer session with Facebook CEO Mark Zuckerberg at the company’s Menlo Park headquarters.

“We had a great discussion about India’s future, the value of social media and the importance of family,” Zuckerberg posted on his Facebook after the event.

Modi then went to Googleplex where he talked with Google CEO Sundar Pichai about the transformation in technology as he grew up in India.

“Technology has become a huge power for democracy. And I can see the benefits of this technology through the Narendra Modi app,” he said.