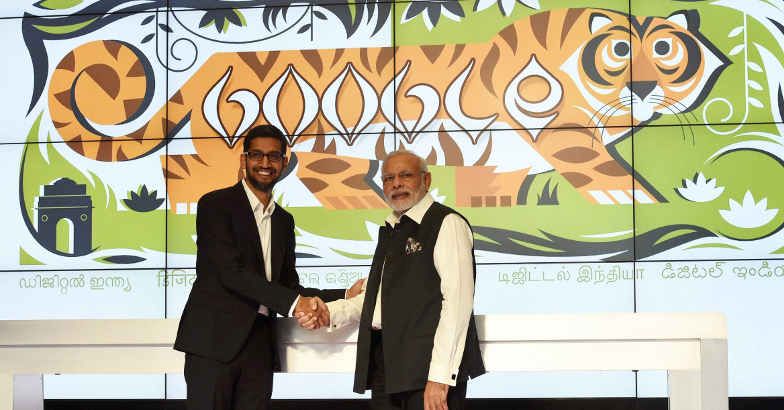 After his townhall style question-answer session at Facebook, Prime Minister Narendra Modi on Sunday visited the Google headquarters for an interaction with CEO Sundar Pichai, and Google co-founders Larry Page and Eric Schmidt.

“It’s a visit to Google Guru, as the PM likes to call it, after the Facebook Q&A,” tweeted PMO India.

Received by Pichai with a handshake, Modi was given a tour of the Googleplex in Mountain View, Santa Clara, and their four critical projects and their value for Digital India.

Modi asked if Khagaul could be pinpointed on Google Earth. Khagaul near Patna is where the great Indian astronomer Aryabhatta had an observatory.

Modi was also shown a zoom-in picture of the Ganga river in Varanasi via Google Earth.

At Googleplex, Modi also witnessed the start of a 15-hour hackathon or a marathon software coding session with some 150 Indian programmers looking to produce software and applications relevant to India for Modi’s Digital India and Skill India missions.

Hosted by the Indian IT industry trade body, the National Association of Software and Services Companies (NASSCOM), along with a clutch of start-ups in India and the US, the hackathon is having a simultaneous session at Tech Mahindra’s Noida facility.

Later on Sunday night, Modi, who last year got a rockstar like reception at New York’s Madison Square Garden, would be hoping to recreate that magic at a community reception in San Jose.

More than 45,000 people have registered for free passes for the event at the 19,000-seat SAP Centre organised by an Indian American group.

Modi, who had come to the Facebook headquarters for a townhall meeting, scrawled the message in Gujarati — “Ahimsa paramo dharma, Satyameva jayatey” — non-violence is the greatest religion, truth will remain victorious.

Modi attended a townhall along with Facebook chief Mark Zuckerberg.

Prime Minister Narendra Modi on Sunday said he dreamt of making India a $20 trillion economy and that he was pleasantly surprised by the change of perception about his country in a short period of time.

Attending a question and answer ‘town-hall’ session with Facebook chief Mark Zuckerberg at their office at Hackers Square here, the prime minister also said a lot had to be done to bridge the digital divide in India.

“We are an $8 trillion economy today. My dream is for India to become a $20 trillion dollar economy,” Modi said, adding: “Amazing, how perception about India has changed in a very short time. We have brought in a new level of confidence.”