JP Morgan announced in January that it had agreed to acquire a stake in Viva Wallet without revealing financial details.

JP Morgan will buy the stake from Viva Wallet’s minority shareholders, including the Latsis family office, which holds about 13 percent of the firm, British fund Hedosophia with about 24 percent and Deca Investments with about 10 percent.

Founded in 2000, Viva Wallet is headquartered in Athens, Greece, and focuses on serving SMBs in 23 countries. Haris Karonis is the CEO and co-founder of Viva Wallet.

J.P. Morgan’s Payments business recently unveiled its brand for SMB payments, Chase Payment Solutions, in the US and the investment in Viva Wallet sets the stage to develop future international products and services across European SMBs. 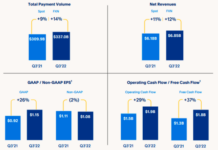