Google ad sales surged 32 percent to $44.68 billion during the first quarter compared with a year ago. Google Search business generated revenue of $31.8 billion in Q1 2021 as compared with $24.5 billion the same quarter last year.

The company’s operating margin rose to 30 percent for the first time since incorporating as Alphabet in 2015 even as its costs began to pick up again. Alphabet in 2020 suffered its slowest sales growth in 11 years but posted record profit and upped its cash hoard by $17 billion after slowing hiring and construction.

Increased ad buying by travel and entertainment companies would be a positive sign as hotel booking services and movie studios are among Google’s biggest spenders.

Google’s ad business, the global market leader as measured in sales, accounted for 81 percent of the quarterly revenue compared with 82 percent a year ago.

The operating loss for Google Cloud, one of the rivals to Amazon.com’s AWS and Microsoft’s Azure, narrowed 44 percent to $974 million in the first quarter. 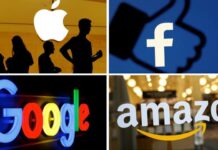