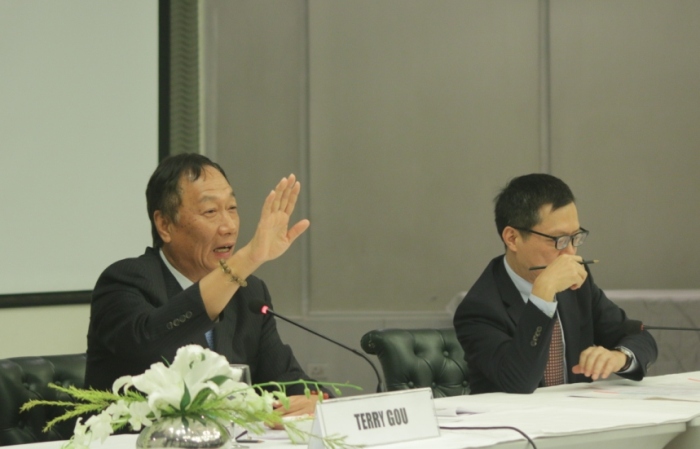 Foxconn will invest in India across verticals like manufacturing, start-ups, energy and e-commerce portals and will be looking at bringing supply chain companies and major technologies.

Addressing a media conference in Delhi, Foxconn chief executive Terry Gou, accompanied by group president Calvin Chih, dismissed numbers in some media reports, clarifying that “while some investments are final, some are not fixed”.

In reply to a question about investing in making 10-12 manufacturing units, he said: “If we are going to manufacture in India, then the investment figure will be much higher than quoted in the media reports.”

“Keeping in line with all the digital initiatives started by Prime Minister Narendra Modi, Foxconn is in India for the long run. We want to integrate our hardware strength with India’s software strength to help India achieve more exports and create a better ecosystem for doing business,” Gou said.

Although Gou highlighted problems like land availability issues, insufficient power, labour laws in ease of setting up plants, he said the $117.5 bn Foxconn is desirous of taking full advantage of the digital wave in the country that has gripped small, medium and large corporations.

“We are looking to partner with with several Internet of Things (IoT) companies to bring in automation across various industries. We want to participate in all the digital initiatives that PM Modi has started,” he said.

Foxconn’s entry assumes significance as India operates under current account deficit and after oil, electronics is the biggest contributor of imports. The Modi government has already targeted to bring down imports to a minimum level.

Gou also confirmed reports that Foxconn had signed a deal with Adani but said that it was not only in the handset business.

“We will work with Adani on various sectors like smart power transmission to make it more efficient,” he said, adding Foxconn was looking for more partners like Adani to expand their ecosystem in India.

Confirming investment plans in research and development projects, Gou said: “We are not divulging figures or locations as India is too huge to decide. We have had talks with several state governments and each state has a speciality. It is too early to give out numbers as it might destroy the credibility of Foxconn.”

“We need to be very careful so as to choose a perfect location that will help us to generate economies of scale,” he added.

Foxconn top brass on Tuesday had a detailed discussion with federal Communications and IT Minister Ravi Shankar Prasad here.

“The minister and Foxconn officials exchanged views. Foxconn is positive on India in various sectors. They have already met the prime minister,” a source told IANS.

India, with its 980 million telecom subscribers base already is home to more than 100 mobile and smartphone manufacturers. Another Taiwanese company Asus and China’s Xiaomi are reportedly in talks with Foxconn for contract manufacturing base in India.