SoftBank Group has agreed to buy 40 percent stake in AutoStore for $2.8 billion, the Norway-based robotics firm said on Monday.

The Japanese company will acquire the stake from funds affiliated with AutoStore’s majority shareholder Thomas H. Lee (THL) Partners and other investors including EQT Private Equity, valuing the firm at $7.7 billion.

Founded in 1996, AutoStore has 20,000 robots deployed across 35 countries and counts Puma, Best Buy and Siemens among its customers. The company also touts a design method that allows customers to store four times the inventory in the same space in a warehouse.

Such technology enables e-commerce companies to deliver packages faster and more economically, as online shopping has surged during the COVID-19 pandemic.

SoftBank in January last year took part in a $263 million funding round in Berkshire Grey, which develops artificial intelligence-based logistics automation systems used by its customers – Walmart, Target and FedEx – in their warehouses and distribution centers, Reuters reported. 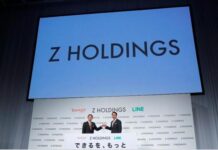