Lenovo, HP and Dell Technologies are the top PC (desktops, notebooks, and workstations) suppliers in the world during the fourth quarter of 2021. 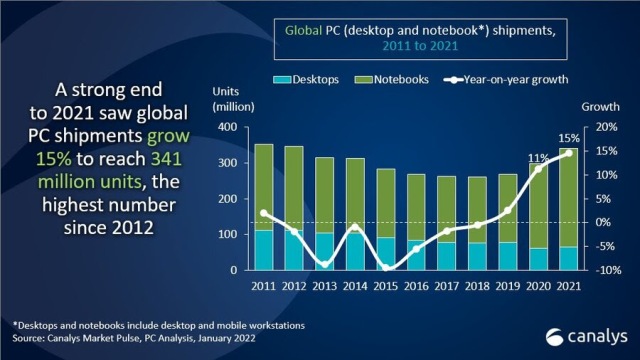 The latest IDC report said shipments of traditional PCs (desktops, notebooks, and workstations) reached 92.7 million units during the fourth quarter of 2021 (4Q21), marking 1.0 percent growth over the same quarter in 2020.

“Consumer need for PCs in emerging markets and global commercial demand remained strong in the quarter with supply being a gating factor. While consumer and educational demand has tapered in some developed markets, we believe the overall PC market has reset at a much higher level than before the pandemic,” said Jitesh Ubrani, research manager for IDC’s Mobile and Consumer Device Trackers.

The latest Gartner report said PC shipments totaled 88.4 million units in the fourth quarter of 2021, a5 percent decrease from the fourth quarter of 2020. Gartner said this is the first year-over-year decline following six consecutive quarters of growth. For the year, PC shipments reached339.8million units in 2021, a 9.9 percent increase from 2020.

“A sharp decline in the U.S.PC market, caused by ongoing supply chain issues and the collapse in demand for Chromebooks, drove this quarter’s slowdown,” said Mikako Kitagawa, research director at Gartner. “This likely signifies the end of the massive and unexpected growth in PC demand triggered by the pandemic.”

PC shipment growth has been supported by an average selling price (ASP) hike, resulting in higher revenues and a healthier market overall. As a result, annual PC shipment volumes are not expected to decline to pre-pandemic levels for at least 2-3 years.

The latest Canalys report  said fourth-quarter shipments exceeded 90 million for the second year in a row. The latest Canalys data shows that worldwide shipments of desktops, notebooks and workstations grew 1 percent to 92 million units over 91 million a year ago.

“2021 was a watershed year in the history of the PC market, with the PC’s place at the center of work, learning and leisure truly cemented,” said Ishan Dutt, Senior Analyst at Canalys. “For the market to post double-digit growth over an impressive 2020, despite the constant cloud of supply constraints, speaks volumes about how strong PC demand has been over the last 12 months.”