The global PC market increased 4.7 percent in Q3 2019 to 70.9 million units, according to Canalys report. 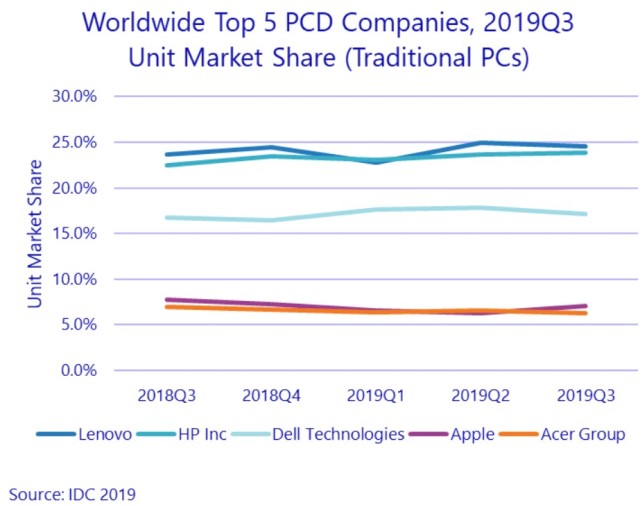 Lenovo, HP, Dell, Apple and Acer are the top PC suppliers, according to both IDC and Canalys.

Factors contributed to demand in PC sales include upgrades to Microsoft Windows 10, and seasonal inventory stocking for the holidays.

PC vendors and channels took precautionary measures to hedge against future disruption. In the US, another round of tariffs is scheduled to take effect on $37 billion worth of Chinese made notebooks and tablets.

Leading PC vendors are pumping up production orders, and channel partners are building inventory ahead of the 15 December deadline. This impact will not last forever, but in the short term it has benefitted the PC supply chain, which saw a positive performance that is likely to extend into Q4.

IDC report said demand in the commercial segment combined with trade tensions between the United States and China drove the PC market forward, resulting in a second consecutive quarter of growth.

The trade tensions are leading to changes in the supply chain as notebook manufacturers are now prepared to move production to other countries in Asia, such as Taiwan and Vietnam, IDC said.

“With January 14, 2020 drawing nigh, the commercial market should be able to digest the extra inventory over the next several quarters. Supply constraints may loom in subsequent quarters, so excess may not be a bad position for channel inventory through the remainder of the year, Linn Huang said.