The global PC monitor market increased 5 percent to 143.6 million units in 2021, according to the latest IDC report. 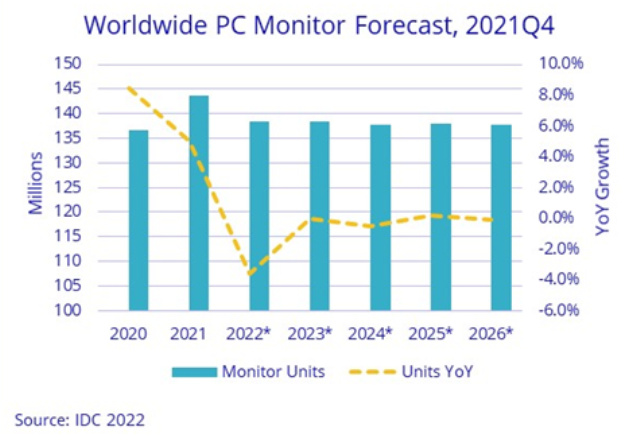 PC monitor market will drop 3.6 percent in 2022 due to market conditions and monitor component supply issues.

Lenovo has increased its share in the PC monitor market to 13 percent from 11.5 percent.

HP has lost its share in the PC monitor market to 10.7 percent from 12.7 percent.

TPV has also lost its share in PC monitor market to 10.5 percent from 12.1 percent.

Samsung has also lost its share in PC monitor market to 8.8 percent from 9.7 percent.

“Whether it was businesses refreshing PCs and monitors as they moved towards Windows 10 or the pandemic pivot towards work from home, these developments gave a much-needed boost to what had been a staid industry,” said Jay Chou, research manager for IDC’s Worldwide Client Devices Trackers.

“However, we now see growing saturation, inflationary pressures from the pandemic and the Ukrainian crisis further accelerating an already cooling environment in 2022, when we expect monitor shipments to shrink 3.6 percent and then stabilize after.”

Dell and Lenovo emerged as the only two companies in the Top 5 to deliver shipment growth in 4Q21. PC monitor commercial shipments declined 2.2 percent in the fourth quarter. The commercial portion of the PC monitor market reported modest losses in the second half of 2021 due to return-to-office trends. 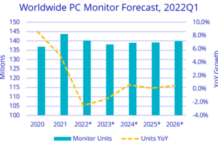