Principled Technologies, which tested these two tablets to measure their compatibility with Sectra Pathology Viewer, says HP ElitePad tablet powered by Intel is the logical choice for global healthcare workers. 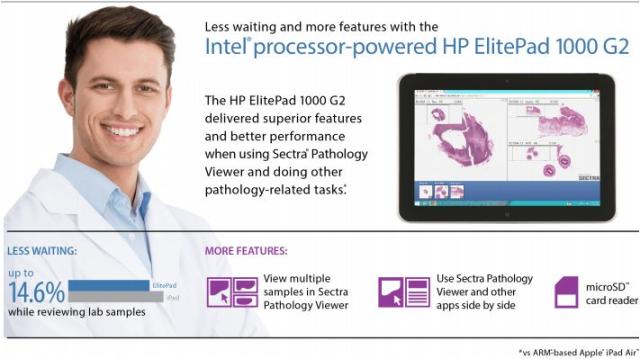 Both tablets have a touch-focused user interface, business-ready applications, and lab-appropriate features. The devices had similarities in appearance, both coming in slim form factors, but contained different hardware and software features.

HP ElitePad 1000 G2 had vibration feedback when pressing certain buttons, alerting the user when the device registered selections. Intel processor-powered HP ElitePad 1000 G2 provided up to 14.6 percent less waiting than the Apple iPad Air and offered more features such as the ability view multiple samples at a time.