Dell Technologies and HP warned the ongoing computer chip shortage could impact their ability to meet demand for laptops this year. 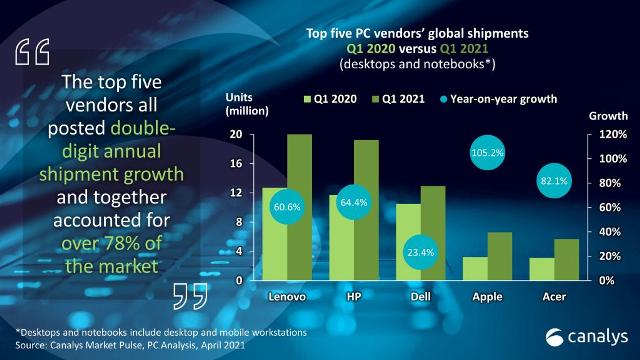 Canalys Research earlier said chipmakers are bullish about personal computing, and have increased their planned future investments to capitalize on the long-term opportunity.

Rushabh Doshi, Canalys Research Director, said: “As average prices rise due to the scarcity of internal hardware, innovation in design is triggering long-term changes to the way PC vendors approach supply and demand.”

“Despite the concerted efforts of the supply chain to ramp up production, Canalys expects the PC market to be supply-constrained for most of this year,” said Ishan Dutt, Canalys Analyst.

“The component supply situation remains constrained,” Dell Chief Financial Officer Thomas Sweet said  in post earnings call, adding that rising costs to procure these chips would hit its operating income in the current quarter by the low to mid-single digits and lead to slightly lower revenue on a sequential basis.

HP, which ranks second among global PC vendors according to IDC data, said the shortages would limit its ability to supply personal computing devices and printers at least until the end of the year.

An IDC report indicated earlier that shipments of PCs are expected to grow 18.1 percent in 2021 with shipments of just over 357 million units despite concerns around semiconductor shortages. IDC expects PC growth to drop 2.9 percent in 2022. 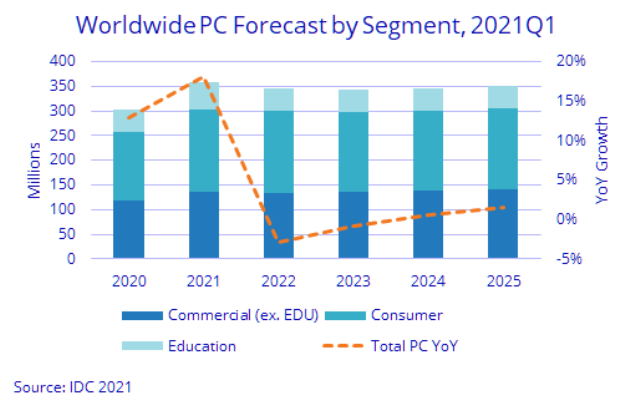 Mature technology nodes account for more than 50 percent of all the capacity in the semiconductor industry and suppliers are only gradually increasing capacity as they prioritize on the largest segments of their business and invest more on mainstream and leading-edge nodes. IDC expects that shortages will begin to ease by the end of Q3 this year.

“As the component shortages continue into next year, some of the PC buyers will settle for desktops in place of notebooks as the urgency of demand for any kind of PC remains quite high,” said Jitesh Ubrani, research manager for IDC’s Worldwide Mobile Device Trackers.

Dell Technologies and HP, which are leaders in the personal computing industry, said they are bullish on the overall PC market, expecting the surge in demand for laptops needed by people working and going to school remotely to continue.

Global shipments of PCs grew 55.2 percent during the first quarter, according to preliminary data from research firm IDC.

Dell said revenue from its client solutions group, which includes desktops, notebooks and tablets, rose 20 percent to $13.31 billion in the reported quarter.

Lenovo, which announced financial results on Thursday, did not make any comment on chip shortage or supply chain issues. 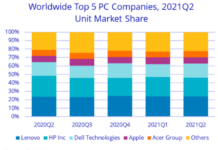