Worldwide PC (including tablet) shipments fell 3 percent in Q1 2022 to 118.1 million units, according to Canalys report. 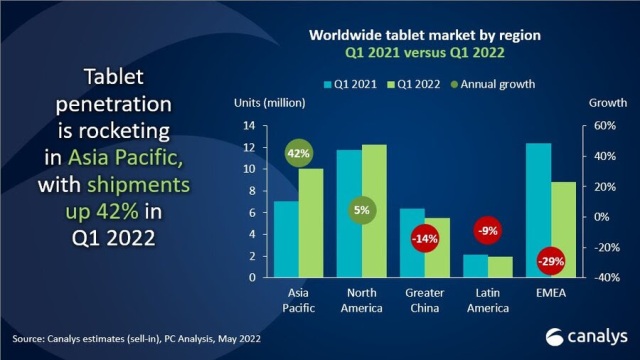 Apple, in first place, saw a 2 percent fall in shipments in Q1 as it shipped 14.9 million iPads worldwide.

Amazon surpassed Lenovo to take third place with a growth of 3 percent on the back of discounting of its Fire tablets.

Lenovo endured the second biggest decline of the top five vendors, with its shipments down 20 percent year on year to 3 million units.

Huawei rounded out the top five, with a 22 percent decline and 1.7 million tablets shipped globally.

Chromebook shipments fell by 60 percent in Q1 to 4.9 million units following the category’s massive surge in the first half of 2021 when education bodies in major markets were buying devices in great numbers.

Lenovo topped the Chromebook market despite its shipments falling by 63 percent after the completion of Japan’s GIGA project, which almost exclusively sourced from Lenovo.

Acer moved to second place in the market with 1.1 million units shipped, down by 21 percent.

Dell had the smallest decline of all vendors, partly due to its limited presence in the education segment, which has carried the majority of shipments for other vendors.

HP suffered from the steepest drop in shipments at 82 percent. HP specialized in the US education market for several quarters but has suffered greatly from the market’s saturation.

Asus rounded out the top five, with a 48 percent fall in shipments.

In the total PC market (including desktops, notebooks and tablets), Apple took first place from Lenovo as it shipped 22.3 million units in Q1 2022, up 1 percent annually.

HP’s shipment of 15.9 million units placed it third as it also underwent a significant decline of 18 percent.

HP and Lenovo faced a difficult comparison from a volume perspective due to their large Chromebook output in Q1 2021.

Dell took fourth place and benefited from the commercial demand surge, helping it achieve a healthy 6.1 percent growth in shipments to 13.8 million devices.

Samsung rounded out the top five with 8.8 million units shipped.