Juniper Networks claims that data centers will gain as the new QFX3000-M uses up to 63 percent less space, uses up to 74 percent fewer cables and consumes up to 57 percent less power than competitive solutions.

In another development, Juniper Networks said its added enhancements to its EX8200 switches running Virtual Chassis technology. The new chassis technology enables customers to manage up to four data center cores as a single switch.

“Buildings built to last are constructed on the most solid foundations with the best materials. Data centers are no different. Today Juniper is giving mid-size enterprise CXOs the foundation and building blocks to enable management simplicity, the ability to scale without adding complexity and high application performance in their data centers,” RK Anand, executive vice president and general manager, Data Center Business Unit, Juniper Networks.

“Last year we started following their 3-2-1 data center network simplification strategy by deploying a new two-layer network that’s actually been working really well. Having evaluated the QFabric System, we found its operational and low-latency performance advantages, which are particularly important to high-performance computing, to be so compelling we decided to adopt it as our standard infrastructure across both data centers. That frees up our investment in Juniper Network EX Series switches, which cuts the cost of giving the campus network a much needed upgrade,” said James Harper, associate director, Operations,UniversityofAuckland. 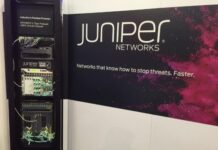 Juniper Networks to buy Apstra as part of AI-driven automation