The installed base of operational data centers will pass the 1,000 mark in three years’ time, Synergy’s new hyperscale forecast shows. 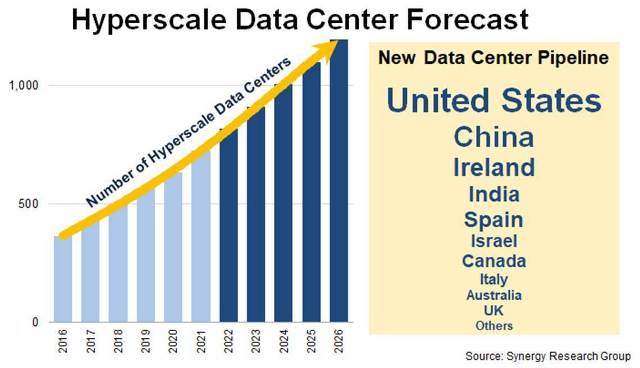 Companies such as Amazon, Microsoft, Google, Facebook, ByteDance, Alibaba and Tencent, IBM, among others, are making huge investment in large data centers in order to support their ever-expanding business operations. 314 hyperscale data centers are coming up.

The United States currently accounts for almost 40 percent of operational hyperscale data centers and half of all worldwide capacity.

The United States will have the most data centers in the future pipeline, followed by China, Ireland, India, Spain, Israel, Canada, Italy, Australia and the UK.

As the installed base of operational data centers continues to grow each year at double-digit percentage rates, the capacity of those data centers will grow even more rapidly as the average size increases and older facilities are expanded.

The companies with the broadest data center footprint are the leading cloud providers – Amazon, Microsoft, Google and IBM. Each has 60 or more data center locations with at least three in each of the four regions – North America, APAC, EMEA and Latin America.

The companies that feature most heavily in the future new data center pipeline are Amazon, Microsoft, Facebook and Google.

“The future looks bright for hyperscale operators, with double-digit annual growth in total revenues supported in large part by cloud revenues that will be growing in the 20-30 percent per year range. This in turn will drive strong growth in Capex generally and in data center spending specifically,” said John Dinsdale, Chief Analyst at Synergy Research Group. 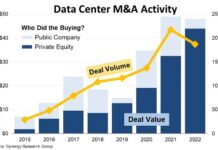