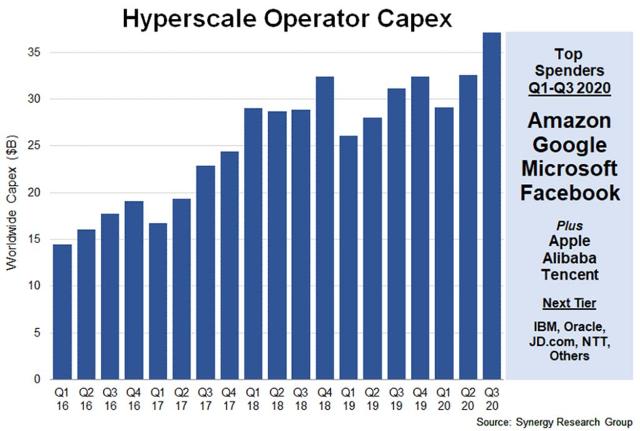 The top four hyperscale spenders in the first three quarters of 2020 were Amazon, Google, Microsoft and Facebook.

The other biggest spenders are Apple, Alibaba and Tencent.

Outside of the top seven, other leading hyperscale spenders include IBM, JD.com, Baidu, Oracle and NTT.

Much of the hyperscale Capex goes towards building, expanding and equipping huge data centers, which grew in number to 573 at the end of Q3.

The hyperscale data is based on analysis of the capex and data center footprint of 20 of the world’s major cloud and internet service firms, including the largest operators in IaaS, PaaS, SaaS, search, social networking and e-commerce.

In aggregate these twenty companies generated revenues of over $1.1 trillion in the first three quarters of the year, up 15 percent from 2019.

“Hyperscale operators’ revenues and Capex have both grown by strong double-digit amounts this year and this has flowed down to strong growth in spending on data centers, up 18 percent from 2019,” said John Dinsdale, chief analyst at Synergy Research Group. “They generate well over 80 percent of their revenues from cloud, digital services and online activities.”