InfotechLead
Home Cloud Microsoft sales jump 2% to $52.7 bn as it gains share from... 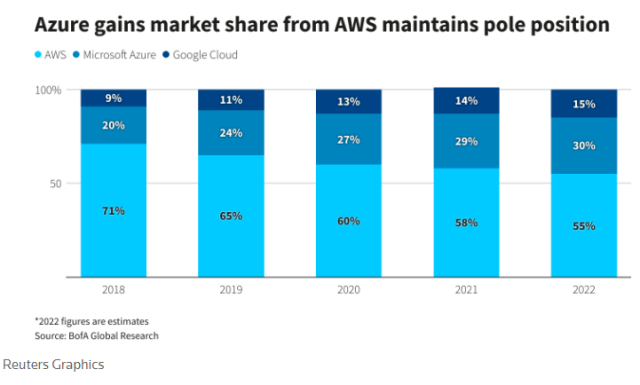 “The small miss on Microsoft’s cloud earnings forecast is likely just a reflection of the new economic reality that businesses are facing and not a harbinger of something worse,” said Bob O’Donnell, chief analyst at TECHnalysis Research.

Microsoft said in its earnings report that it forecast third-quarter revenue in its intelligent cloud business would be $21.7 billion to $22 billion.

Microsoft’s cloud business is under the spotlight again following the viral success of chatbot ChatGPT, which answers general questions in plain language using artificial intelligence. The bot is a creation of startup OpenAI, in which Microsoft is investing heavily and which requires intense cloud computing services.

“There’s a variety of ways that we can bring that technology either in specific offerings or to improve existing offerings,” said Brett Iversen, Microsoft’s head of investor relations, referring to OpenAI. He said revenue from OpenAI-related businesses would show up in revenue for Microsoft’s cloud service Azure in the future.

During the earnings call, Microsoft CEO Satya Nadella said it was early to separate out AI contribution from the Azure cloud workloads.

Azure ended 2022 with 30 percent share in the cloud computing market, up from 20 percent in 2018, according to estimates from BofA Global Research. AWS dropped to 55 percent from 71 percent during the same period.

Sales at Microsoft’s More Personal Computing segment is expected to drop to $11.9 billion to $12.3 billion in the current fiscal third quarter.