Revenue of Amazon Web Services (AWS) and Microsoft Azure grew in Q4 2018 due to the rapid adoption of cloud infrastructure services. 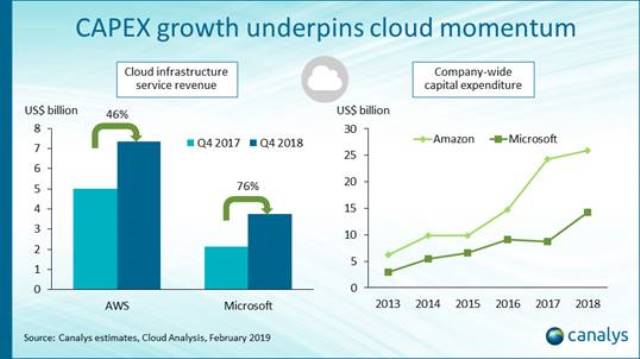 “2018 was another year of rapid growth as businesses accelerated digital transformation projects and workload migration. This is set to continue in 2019, with more customers adopting multi-cloud strategies, including hybrid IT,” said Canalys Research Analyst Daniel Liu.

AWS maintained momentum due to traction from its enterprise customers, while Microsoft’s progress benefits from its long-standing hybrid IT initiatives, taken up by its existing large base of on-premises customers.

AWS has 60 cloud infrastructure locations worldwide, with another 12 under construction in Bahrain, Hong Kong, Italy and South Africa. Amazon’s Capex spend reached $26 billion in 2018, though the rate of growth slowed to 7 percent year on year.

Microsoft’s Capex rose 64 percent to reach $14 billion. Microsoft has 54 cloud regions, with another 10 being launched across Western Europe and Africa.

The investment to build interconnected cloud data centers is huge, and due to the constant pressure to optimize data center operating costs, refresh cycles are shorter as they drive innovation.

Canalys said the signs are they are currently focusing more on capacity utilization, which will be reflected in their CAPEX numbers in the first half of 2019. This will impact infrastructure and component suppliers in the short term.

Amazon, which generates revenue from e-commerce and AWS, posted a 63 percent jump in net income to $3 billion for the fourth quarter. Sales rose 20 percent to $72.38 billion, and a record number of shoppers signed up for the company’s loyalty club Prime in the fourth quarter.

AWS expanded its infrastructure in 2018 to serve customers, launching the AWS GovCloud (US-East) and AWS Europe (Stockholm) Regions, and announcing plans for both the AWS Africa (Cape Town) as well as the AWS Europe (Milan) Regions. AWS now provides 60 Availability Zones across 20 infrastructure regions globally, with another 12 Availability Zones and four regions in Bahrain, Hong Kong SAR, Italy, and South Africa all coming online by the first half of 2020.

Airtel to sell AWS Cloud services to SMEs and enterprises 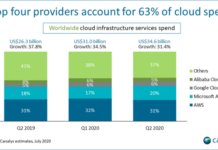