The transition, slated for the summer, will make current cloud computing head Andy Jassy the next chief executive officer of Amazon.

“Jassy’s background in steering AWS shows just how top of mind those services are to Amazon’s business strategy. It’ll be interesting to see how that affects their strategy and balancing that priority with a growing ad business and the commerce behemoth,” he said.

Jassy is known for understanding technical details, and he has regularly taken jabs at legacy player Oracle and cloud rival Microsoft, which AWS continues to exceed in sales.

He has bestowed a rock-star aura to keynotes at AWS’s annual Las Vegas conference, speaking before over 60,000 attendees in 2019 after upbeat music preceded his talk.

Bezos, who started the company 27 years ago as an internet bookseller, said in a note to employees posted on Amazon’s website, “As Exec Chair I will stay engaged in important Amazon initiatives but also have the time and energy I need to focus on the Day 1 Fund, the Bezos Earth Fund, Blue Origin, The Washington Post, and my other passions.” Blue Origin is Bezos’ space company, and the Post is his private newspaper holding.

Bezos, age 57, added, “I’ve never had more energy, and this isn’t about retiring.”

Net sales rose to $125.56 billion as consumers turned to the world’s largest online retailer for their holiday shopping.

Jassy’s AWS posted revenue of $12.7 billion. The cloud computing division announced deals in the quarter with ViacomCBS, the BMW Group and others.

Amazon said it was not announcing an AWS replacement for Jassy at this time. 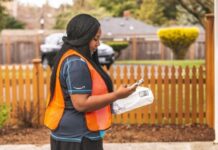